Busy, busy, busy. I'm finishing up a movie poster this weekend and a new cover for Valiant Comics. I'll have a new Muddy Colors post on Monday, but then I'll take a blog break for a week or more. Didn't I just take a vacation? Have a great weekend!

(For those of you interested in a commission for Sacramento or Mexico City, I'll open up the list shortly after my return.)

Posted by Paolo Rivera at 12:02:00 AM
Email ThisBlogThis!Share to TwitterShare to FacebookShare to Pinterest
Labels: Inked, Painted, Portraits
2 comments


Here's one from the vaults. This is from so long ago, I was using my friends as models and painting with oils. The digital color study below was made in Photoshop with a Wacom tablet, long before I made the switch to the Cintiq.


In case you missed the link on Twitter or Facebook, our wedding was featured on Style Me Pretty! (Huge thanks to our photographer, Tory Williams!) I posted most of the art from the event previously, but not the Thank You cards. I did the whole thing digitally, from sketches to color. I had wanted to write the "Thank You" in the Turtles lettering, but my editor (my wife) voted it down. I was also going to draw the Turtle Van with a "Just Married" sign and Mousers dangling behind... but there wasn't room. Oh, well.

And down at the bottom, you can see my sketches for our wedding cake topper. I did a time lapse of the sculpting process, but haven't spliced it all together yet. Someday. In the meantime, have a great weekend! 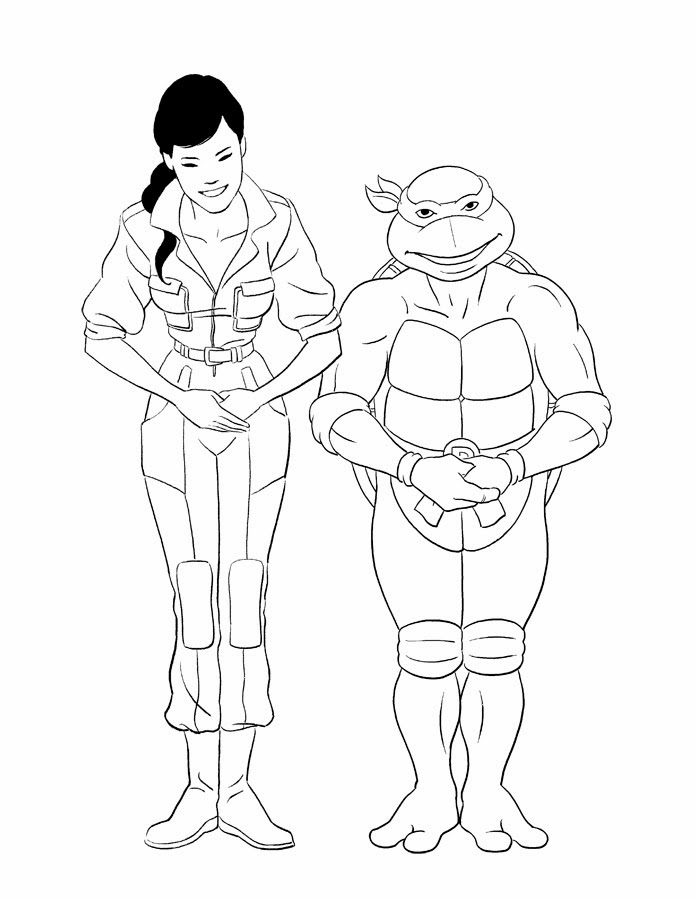 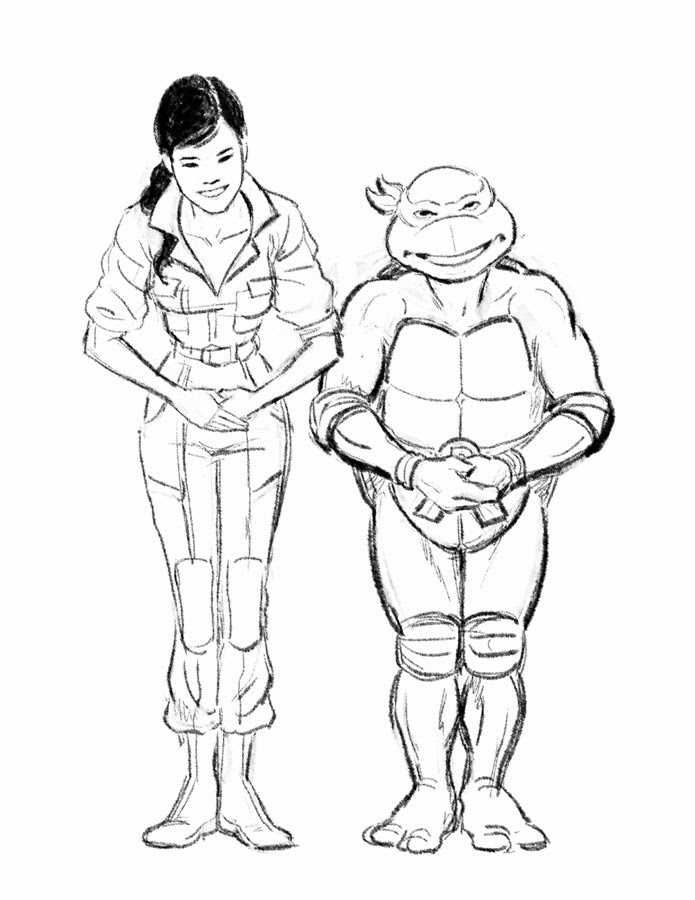 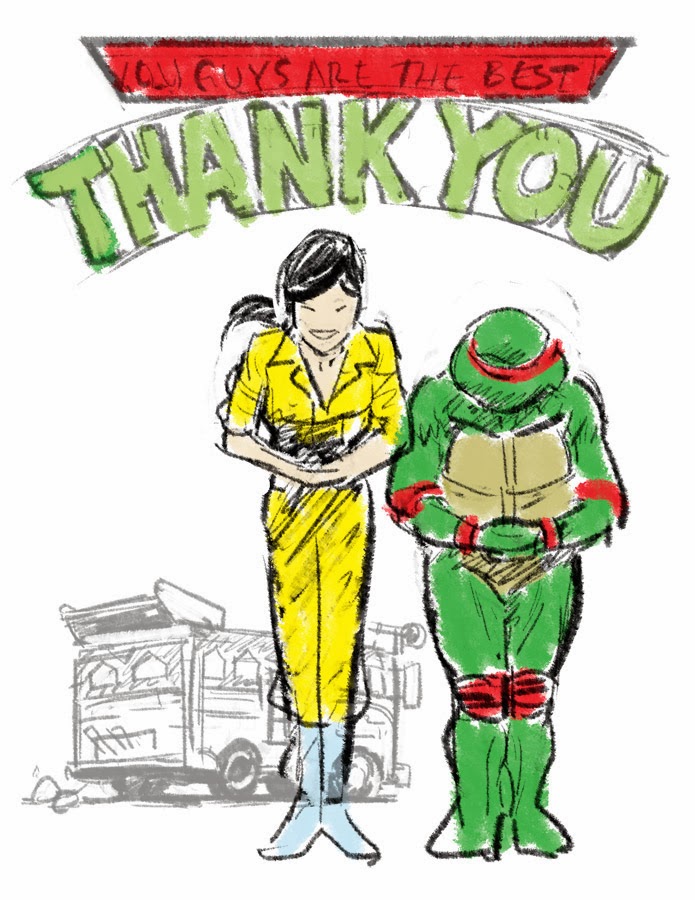 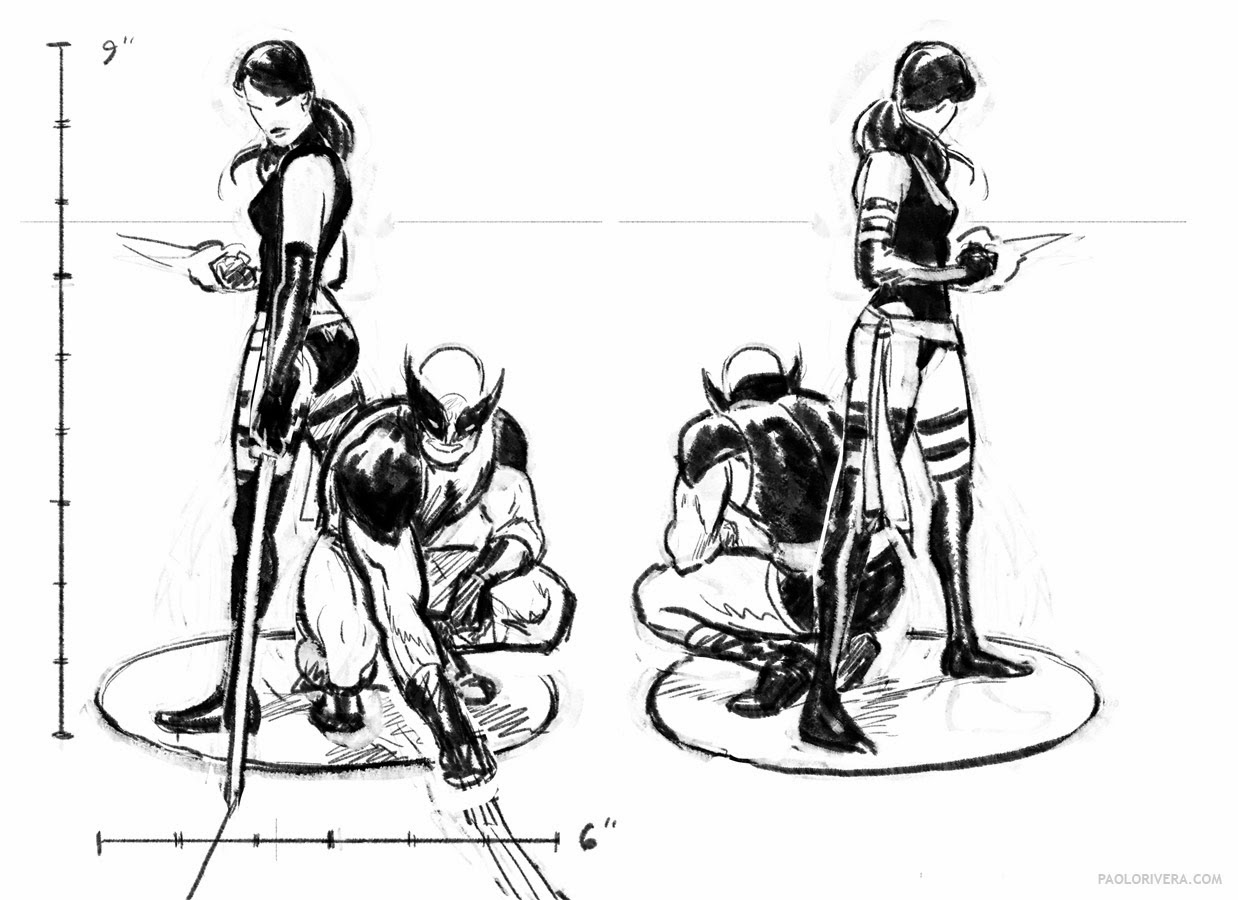 Posted by Paolo Rivera at 12:00:00 AM
Email ThisBlogThis!Share to TwitterShare to FacebookShare to Pinterest
Labels: Digital Color, Inked, Pin-Ups
4 comments


This cover managed to slip through the cracks of weekly posting. Superior Spider-Man Team-Up #9 comes out today (and you can see a preview here). I had a lot of fun with this one, not least of all because I got to draw Daredevil. Down below, you can see me doing my best DD impression... and Spidey and Punisher to boot.

Batman in Black and White (and Gray)


When I was first invited to contribute to Muddy Colors, part of my role was to be the designated "comic book guy." As it turned out, that was roughly the same time that I stopped making comics altogether. I was still very much in the business, but I was really only a cover artist for most of last year. The only exception was a an 8-page story for Batman: Black & White #5, written by Ivan Brandon, which just recently came out.

Doing just a handful of pages reminded me not only of how difficult it is to make comics, but also how fulfilling the challenge can be. My goal for 2014 is to get back to doing what I love.

If you've seen my previous posts, you'll probably recognize the familiar steps I take to create a piece of art. As with my covers, I work with my Dad, Joe Rivera, to help speed up the process. Pictured above are his inks, which are done over blue-line prints of my pencils, pictured below. I create the borders digitally, along with other technical elements — such as the road sign — and leave those to be printed in black.

If you cycle between the finished page and the original inks, you'll see that I sometimes go back in and "ink" digitally. I've gotten better at "spotting blacks" without actually putting ink on the page, but it can be tough to make those compositional choices without seeing the results in front of me. In particular, you can see that I blacked out the right rear fender in the 1st panel and most of the steering wheel in the 3rd. I'm always looking to get away with the least information necessary, so if I ever see a way to take detail out of a composition without losing the subject matter, I go for it.

The pencils are drawn on 11 × 17″ bristol board over a print of my digital sketch. The Xs indicate where I want solid black, whereas a squiggly line crossing another line (like on the Batmobile's hood) indicates a softer, dry-brush effect. Everything else is pretty much what-you-see-is-what-you-get.

Even the simplest panels can benefit from perspective guidelines, and so I use them whenever I can. These are done in Photoshop using Smart Objects and various patterns that I made myself. In the top panel, the right vanishing point is on the horizon, but the left one is set below to suggest a slight incline to the road. (I've been promising for years to release this template to the world, but it's still a ways off. I recently sent it to friends for beta testing, but most had a tough time with it. An instructional video is the only way to learn how to use it and I haven't had the time to make one).

Down below, you can see where it all starts. I do all my layouts digitally now — have been since I got my first Cintiq — and I don't think I'll ever go back. This was done in Photoshop with each panel on its own layer, plus a grayscale layer on top of everything (and set to Multiply, same as I would for color). I just copy and paste Ivan's script into the file and move things around as I see fit.

Half the job is graphic design — making sure that each caption or balloon is read in the correct order and has the appropriate impact. Often there are several pieces of text in one panel, but some are meant to be read more quickly and/or separately. For instance, if you want the reader to see the artwork before reading a certain line, be sure to put it in the bottom right corner.

While I'm not the one who ultimately letters the piece, it's still my job as the penciler to leave an appropriate amount of space. I always share these sketches with the letterer just in case my intentions are not immediately apparent.

Things like that may seem like common sense, but it can be easy to forget while balancing so many variables. The other half of the job is just keeping things logical and consistent. Are Batman's bandages in the right place? Would we be able to see Gotham City from Wayne Manor? Did he grab his cape with the right hand (I made this mistake on page 3 and had to redraw a couple arms).

All that being said... it's just plain fun drawing Batman. It was a dream of mine since I was a little kid, so I've had nearly 30 years to think of what my take on the Dark Knight would be. He doesn't wear a cape — it's a parachute. Those aren't undies outside of his pants — it's a harness. His Batmobile is built like a low-slung race car, but with a hydraulic lifts for off-roading.

Basically, I got to nerd out for 8 pages. I hope others can too. For a look at another page from the story (as well as some Wacky Reference Wednesday action) check out this previous post.
Posted by Paolo Rivera at 12:00:00 AM
Email ThisBlogThis!Share to TwitterShare to FacebookShare to Pinterest
Labels: DC, Inked, Joe Rivera, Penciled, Perspective, Sequential, Step by Step
6 comments


Here's my contribution to the Cartoon Art Professional Society auction for Stan Sakai. I'm not sure when the pieces will go up for bid, but I'll announce it here as soon as I know. Have a great weekend!
Posted by Paolo Rivera at 12:00:00 AM
Email ThisBlogThis!Share to TwitterShare to FacebookShare to Pinterest
Labels: Painted, Pin-Ups
2 comments


It's the 250th edition of Wacky Reference Wednesday! To celebrate, we're going to look at pictures of me with my shirt off. (I miss my external obliques.) The sculpted heads are lit for a different cover, but they were in this group of photos so I thought I'd throw them in. The beach toy pics I found on-line. I wonder if I still have that Darth Maul beach towel...

Years after I did this piece I redid Sue's face. The color was fine, but the drawing was off — her nose was doing something funky that I didn't know how to fix at the time. Live and learn.

I hope to have another Wacky Reference contest for #300. You should all start preparing now. Also, you can buy a print of this in my store.


It looks like Elektra is getting her own series. I got to do this variant cover to help promote the launch. As for my own project, I'm 45% of the way through the script (with the whole thing plotted). If this weren't such a gargantuan undertaking, I might try doing it "Marvel Style" — just a loose page-by-page plot — but I want to be able to hand it to my writer friends for (vicious) critiques.

Last week I stopped by the Image Expo after-party to catch up with friends and colleagues. I have to say they've got a great line-up of creators. I hope to be part of the mix some day.

Lastly, I've consolidated the links at the top of the blog. You can now find a large collection of my work under the Gallery link.
Posted by Paolo Rivera at 12:00:00 AM
Email ThisBlogThis!Share to TwitterShare to FacebookShare to Pinterest
Labels: Covers, Digital Color, Inked, Joe Rivera
6 comments


I've got this Ant-Man portrait up on eBay at the moment. You can bid on it here until Sunday. On Monday, I should have a finished Usagi Yojimbo pin-up, Japanese wood-block style. Have a great weekend!
Posted by Paolo Rivera at 12:19:00 AM
Email ThisBlogThis!Share to TwitterShare to FacebookShare to Pinterest
Labels: Inked, Painted, Portraits
3 comments


Batman: Black & White #5 comes out today (you can see a preview here) and features an 8-page story written by Ivan Brandon, penciled (and toned) by myself, and inked by my very own father, Joe Rivera. It felt really good to get back into sequential work and it was a blast working with Ivan, who I've known for many years, but never collaborated with — hoping we get to do it again this year.

I can't lie, folks — it was a friggin' dream-come-true to draw the Caped Crusader. Hell of a way to start the new year.