In other news, my Cap portrait to support the Hero Initiative is up for auction — open for bidding until November 5th.


Mondo Gallery in Austin, Texas is hosting a show that honors EC Comics and Tales from the Crypt. "It Didn't Rot Our Brains" runs from October 25 through November 23 and I'm happy to be included among the many artists. Although I've always been a fan of the Crypt Keeper (who is rumored to be based on a RISD professor) I went the sci-fi route and did a tribute to Wallace Wood, one of my favorite comic book artists. I like to think that, like him, I take draftsmanship seriously (and little else). 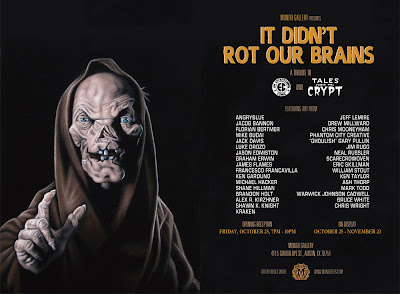 I inked this cover myself since it was for a show and they needed it quickly (my Dad, Joe Rivera, usually inks my work). That being the case, I "penciled" it digitally in Photoshop and printed it out in blue-line, then went straight to inking. I used a Winsor & Newton Series 7 #6 brush for everything but the lettering, which was penned with a Speedball B-6 nib. Holbein Drawing Ink is my ammunition of choice, which provides a rich black and dries to a waterproof finish.

Pictured above is a darkened version of what I actually inked over. Converting to blue-line is easy with an adjustment layer in Photoshop set to "Colorize" — this turns every layer below to the same hue, which can be then be adjusted according to taste. Below is a screenshot of my typical setting: Hue - 196, Saturation - 100, and Lightness +94.

Prior to that is the rough sketch stage where my primary concern is composition and legibility. I always distribute the main elements to separate layers so I can nudge them into position, or scale them if need be. This is also where I lay in a perspective template that helps keep all the technical aspects aligned. Since this was a tribute cover (with the full support of the Bill Gaines estate) I used the trade dress from an actual Wood cover to frame my own work. Their only request was that I use an issue number that wasn't already taken.

Since this was not for publication (and only pays if it sells), the approval process was pretty lax — and so I dashed off a few rough layouts with quick descriptions of what was going on. Of course, now that I did them, it makes me want to draw an entire series. 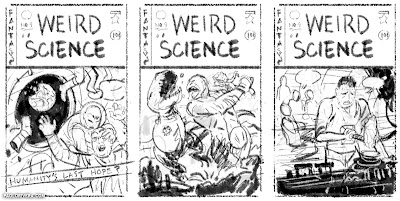 The whole process, start to finish, took 30 hours, half of that being inking. Because of the tight schedule, I didn't have time to color the original, but I still hope to color it digitally at some point. Of course, if the art doesn't sell, I'll just get it back and finish it up with watercolor and touches of gouache.

Posted by Paolo Rivera at 12:00:00 AM
Email ThisBlogThis!Share to TwitterShare to FacebookShare to Pinterest
Labels: Covers, Details, Inked, Sketches, Step by Step
3 comments


This may have already made its way to stores, but I hadn't shared it on the blog yet. (Preview here.) It's about a young mutant named Fulmina whose electrical talents inadvertently cause a major blackout in the big city. I was a big fan of her electric ponytail, so I used it to split the city into light and dark. Thanos, of course, is never up to any good. You can tell by the way he hovers above the skyline (as all good villains do).

Batman (and a Gargoyle)

Posted by Paolo Rivera at 12:00:00 AM
Email ThisBlogThis!Share to TwitterShare to FacebookShare to Pinterest
Labels: Inked, Painted, Pin-Ups
0 comments


In case you didn't hear me scream it on Twitter earlier this week... I get to draw Batman! Professionally! As in DC Comics is going to pay me to draw him. Actually, both of those things have already happened and the 8-page Batman: Black & White story will be out in January. It's written by Ivan Brandon and inked by my Paw!

I don't think you understand. Perhaps this drawing from when I was 11 will help (based on a brilliant drawing by Jerry Ordway). Have a great weekend! 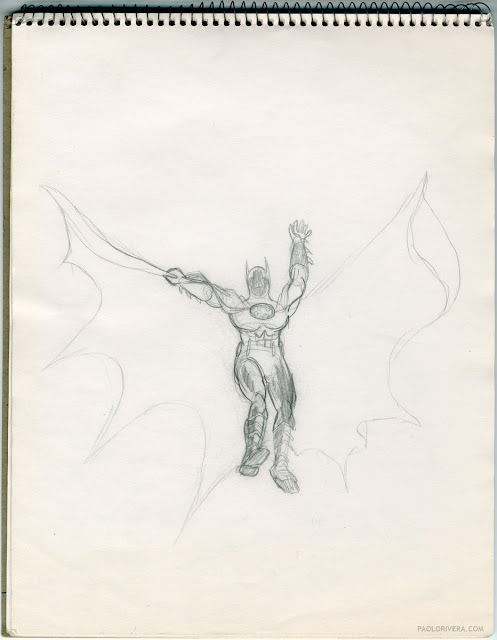 
Guardians #7 is out today! My contribution is a variant cover, so it may be difficult to find. You can see a preview here. This was the last of 3 EC Comics-inspired covers (you can see the other 2 here). I'm actually working on something similar but unrelated at the moment — hope I can share it soon. All the work is inspired by Wallace Wood, but this cover in particular was mainly influenced by Al Feldstein.

As you can see in the digital sketch stage, I utilize a perspective grid to help me organize the space. Many of you have been asking when I plan to release it — I have good news and bad news. The good news is I've started the beta-testing phase and shared it with a handful of professionals. The bad news is that some are having a tough time with it. I'll be the first to admit that it's a bit cumbersome, which is exactly what I was worried about. If we can work out all the kinks, then I'll be happy to distribute it widely, but right now... it could go either way.


I'm back to posting at Muddy Colors after a month-long hiatus, during which time... I got married! I created a few pieces of art for the event, and I hope you don't mind if I share them here. As you can see, my professional art doesn't stray far (or at all) from my personal work.

My wife grew up reading (and loving) Tintin so we decided on that style for the invitation and save-the-date. Despite never reading the series in my youth, I was always aware of the character and had great respect for Hergé, its creator. 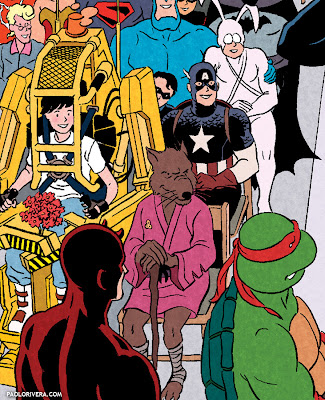 You may recognize many of the characters who, like our guests, are very dear to us. Although I split the crowd in half according to our personal favorites, there's quite a bit of overlap. My favorite part is featured above: Ripley using the Power Loader from Aliens to hold her bouquet.

To push the idea further, each of our guests was given a Lego character for their seat assignment — nearly 100 in all. They didn't all match up with the invitation, but we tried to pair the right character to the right guest. My wife designed the name cards (as well as every other piece of graphic design).

Our wedding was held at Blue Hill at Stone Barns, which takes pride in growing and serving their own food. It's a beautiful, bucolic setting — the Rockefeller's former dairy farm, in fact — and the weather was perfect. Our Save-the-Date features the main entrance, which is where we attempted a live-action version right after the ceremony. 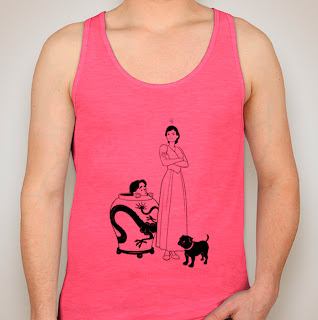 I also did the bachelorette t-shirts, which were based on Le Lotus Bleu, another Tintin adventure. Pictured below is the wedding cake topper, which I baaaarely finished in time. Most people probably know Wolverine by now — that's Psylocke on the left. This was before I added three claw marks to the cake with a knife.

And finally, my Mom commissioned one of my good friends, Maris Wicks to create a portrait of us. I love it. I was a huge Ninja Turtles fan growing up, Raphael being my favorite. My wife's name is April, so I think it must have been destiny.


Here's a web banner I did earlier in the year for Comics Experience, the on-line comics course where I gave a lecture this summer. I pretty much had free-reign to do whatever I wanted, so I tried to channel a few different genres in my sketches. Originally, I was going to do more, but I ran out of time.


I forgot which way the image needed to face, and so I had to flip the final version. Since I inked this one myself, I went straight from digital sketch to inks with minimal penciling.

You can catch Comics Experience at NYCC this weekend. I couldn't make it to the show this year, but hopefully I can next time around. If you're in the city, be sure to keep an eye out for the Valiant car, which sports our cover for Unity #1. And finally, if you're in the market for my original art, Splashpage will have a booth at the show, #2405. Have a great weekend! 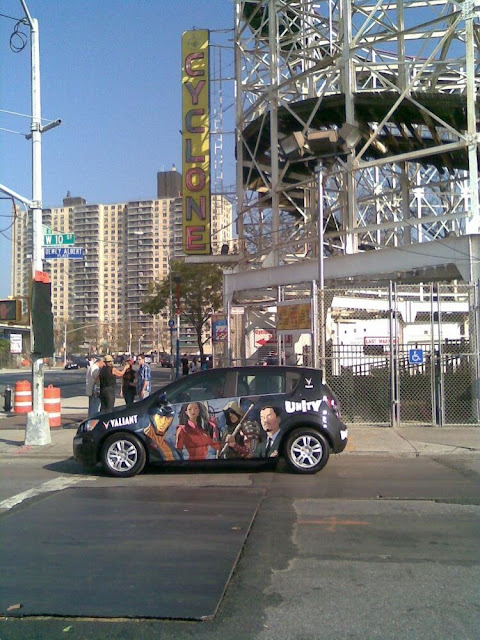 
This came out last week (preview here) so be sure to pick it up. This cover was definitely one of my best ideas for the series, but I don't like the finished product as much as I had hoped. Part of me wants to try it again as a painted piece, perhaps with smoking barrels this time. I wish H.J. Ward were here to do it right.