Greetings, loyal blog readers! I will be taking a 3-week break from posting and (should everything go according to plan) will return to my regular schedule on October 7th. But before I leave, I thought I'd leave you with a video of the inking and painting process for the above portrait. The Cap piece, based on a Kirby drawing, will be auctioned off in support of the Hero Initiative, part of the Wake Up and Draw campaign on Kirby's birthday, August 28th.

(I had an inking video too, but I think 18 minutes of watching paint dry is enough. Apologies for the bare bones video — you can hear me breathing and muttering to myself.)


On October 10th, We Art Boston will be auctioning off original works by over 40 illustrators (myself included) to benefit the Emergency and Trauma Fund at Boston Children's Hospital. I'll provide another gentle reminder when the time comes, but in the meantime, be sure to follow them on Facebook for the latest updates.

So where am I going? Well, I asked the girl I love to get married and —amazingly — she said yes. I will return as a house husband!
Posted by Paolo Rivera at 12:26:00 AM
Email ThisBlogThis!Share to TwitterShare to FacebookShare to Pinterest
Labels: Inked, Painted, Portraits, Video
5 comments


If you happen to be near my hometown of Daytona Beach, FL, I hope you'll attend the opening reception of Rated G for Graphic, a show that features the works of 5 Floridians who have made careers in the popular arts: John Allison, James Greene, Tiffany Dao, Tammy Dao, and myself. Unfortunately, I won't be able to attend, but my parents will be there for support (my Dad also has inks in the show, so really it's 6 artists).

The local paper had a nice feature on my career and the show, which opens tomorrow at Ormond Memorial Art Museum & Gardens. If you go, please say hi to my 'rents for me. I wouldn't be here without them.
Posted by Paolo Rivera at 12:00:00 AM
Email ThisBlogThis!Share to TwitterShare to FacebookShare to Pinterest
0 comments


Superior Spider-Man Team-Up #3 doesn't hit stands until the 25th, but I'll be on blogging break by then (hopefully you won't forget to pick it up without my constant nagging). My contribution to this cover was completely digital, the only original artwork being my Dad's inks. I did about 3 covers in this manner while I was between studios. To be completely honest, we probably could have used my digital inks in the final, but I like having some kind of physical art.


The weeks are flying by here, folks. I'm going to be taking a blogging break for about 3 weeks pretty soon, but I hope to post at least one more video before I do. I recorded the entire painting process for an ink and watercolor portrait in real time. If all goes as planned, I'll have that for you by next Friday.

Next Friday is also the opening of Rated G for Graphic, a show in Ormond Beach that will include a dozen works, including my Iron Man 3 and Captain America movie posters. I won't be able to make it to the show, but my Dad (and inker extraordinaire) will be there.

And if you haven't heard me blather enough yet, I've got a new interview up at 99 Designs. Have a great weekend!
Posted by Paolo Rivera at 12:00:00 AM
Email ThisBlogThis!Share to TwitterShare to FacebookShare to Pinterest
Labels: Painted, Portraits
2 comments


This issue came out last month, but I never got a chance to post the process. (You can see a preview here.) As you may have noticed, the final cover features a different Spidey costume than the one I had posted earlier (more on that here). I also had to remove the "Spidey Sense" from the Scarlet Spider, who doesn't have all the same talents (as one sharp-eyed reader pointed out). 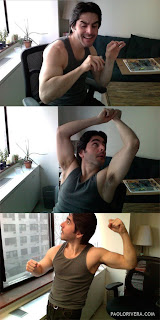 
One of comics' most tried and true tropes is the massive montage, a writhing throng comprised of every character that appears in the story, or is even tangentially related to the mythology. They are, by nature, epic in scope and meant to transform the casual browser into a devoted reader. It's certainly what drew me in as a kid and, as a result, what I wanted most to draw.

George Pérez is, for me at least, the undisputed king of this approach. He even covered the topic in a how-to article for Wizard magazine (to which I was a devoted subscriber). What I love most about his compositions is the underlying sense of hierarchy. Despite the sheer number of figures, each gets their own starring role. The overall effect can be somewhat overwhelming, but the details are what always drew me in.


The variant cover to Action Comics #18 was my own attempt at this motif. Being the last issue of Grant Morrison's run on the series, I wanted something that encapsulated the entire arc in a single image. Without getting into the minutia of the plot, Superman does battle with a 5-dimensional villain that attacks him at different points in both time and space. I used that theme to structure the composition around 5 separate struggles, all tied together through his iconic cape, which doubles as the pentagon of the "S" shield.

Once the concept was approved, I used Photoshop and my Cintiq to make a digital sketch. The accompanying video records that process at 10x speed. I organized each "battle" on separate layers so they could easily be scaled or rotated. The layers are also color-coded so I have an intuitive sense of which strokes belong to which group.

I use this technique in practically all my compositions, each character getting their own layer. Just double click on the layer and select "Color Overlay." That will cover the entire layer in a color of your choosing — the opacity can then be lowered according to taste. Even though I only draw in black and white, it appears as through a colored film.

Although I often referred to the comic, penciled by Rags Morales, for costume details, the figures are drawn "from imagination." (All that really means is that I've copied so many figures that I have a little 3D model of the human form in my head.) The purpose of the digital sketch is to solve issues of proportion and overlap, so the figures aren't particularly "tight," just enough information to indicate gesture and identity.


As I've covered here many times, the rest of the process is just refinement, each stage an improvement over the last (at least theoretically — I almost always like my roughs sketches better). Pictured above is the blue pencil I often use to work out details. In a less detailed cover, I would probably skip this step, as the digital sketch would suffice.

(Fun fact: I draw an "x" wherever I want my Dad to fill in an area with black. Unfortunately, the giant octopus had an "x" for a pupil and so my Dad gave him a black eye. Nothing a little Photoshop couldn't help.)


Pictured below is the first and only sketch I sent to my editor, just to get the idea across without having to show every detail. Luckily for me, he trusted me enough to run with it. Admittedly, it doesn't look much like the final piece.

As involved as these massive montage covers are, I find they're actually much easier than rendering figures in a cohesive environment where each element is subject to overarching rules of perspective and logic. The only real challenge is finding space for everyone and making sure they overlap in a pleasing way. And since many superheroes can fly, there's no space on the page that can't be utilized.


I hope you enjoyed this behind-the-scenes look. I'll be taking a Muddy Colors blog break for the next month (or so) as I take care of some personal business (all good). Thanks for reading!

Newer Posts Older Posts Home
Subscribe to: Posts (Atom)
Welcome to The Self-Absorbing Man, a weekly blog featuring my artwork and creative process. I post on Wednesdays (and often more). Your comments and questions are welcome on any post, old or new, and I hope you'll become a regular reader. Thanks for visiting.
(Comment posting is delayed to prevent spam.)