I saw Iron Man 3 last night and it was all-around awesomeness. That being said, there's nothing that can prepare you for Ben Kingsley's Mandarin — quite possibly my favorite Marvel villain now. Oh, and Robert Downey, Jr. showed up to introduce the movie. Joe Quesada usually introduces the Marvel movies, often pretending that one of the stars is going to make an appearance, only to have our hopes dashed as another editor shows up in a wig. But this time he did it. Iron Man himself was there.

And if everything went according to plan, Iron Man got one of these, an extremely limited edition poster made especially for the cast and crew, much like the one I did for Captain America. They asked for something like a paperback novel, complete with wear and tear, which makes perfect sense once you see the end credits.

This was definitely one of my dream jobs, but it meant even more to me since it's based on my very first cover for Marvel, Iron Man #63. Tony's armory bears a striking resemblance to the one I depicted back in 2002, and I was nerding out in the theater. I hope you'll do the same. 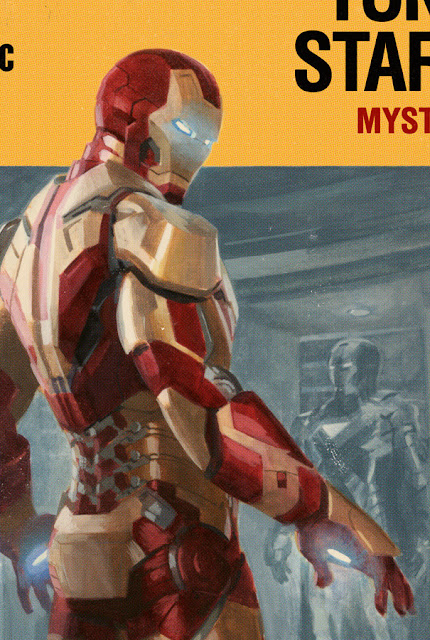 Posted by Paolo Rivera at 8:16:00 AM
Email ThisBlogThis!Share to TwitterShare to FacebookShare to Pinterest
Labels: Covers, Details, Painted