Sometimes you have to make your own reference. The Mole Man's throne room had to serve as a setting for at least 2 scenes, including a drawn-out staff fight, so everything had to make some sort of sense. In order to organize the props and general action, I drew a rough plan of the room in Photoshop. 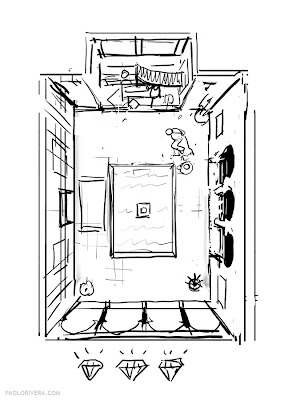 I did, of course, have other reference to help me with the interior design, namely Orientalist paintings of Harems. My Dad, who inked this page, later told me that while watching Hellboy II: The Golden Army on TV, he recognized many similar elements in one of the fight scenes. While I had seen the movie, that certainly didn't cross my mind, but I wouldn't be surprised if the concept artists were looking at the same source material as I was.

This is Auto-Paolo blogging from the past. I should be back to posting on Monday.
Posted by Paolo Rivera at 9:00:00 PM
Email ThisBlogThis!Share to TwitterShare to FacebookShare to Pinterest
Labels: Daredevil, Inked, Sequential, Wacky Reference Wednesdays