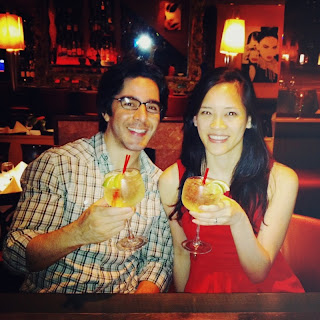 
Sorry ladies, but Marvel's Hunk of the Month (April 2006) has signed an exclusive deal with his longtime girlfriend, April Kuo.

"I feel wonderful!" says Rivera, reflecting upon his new deal with the House of Kuo. "April's a girl I've always loved, and she's one of the best in the business."

Rivera first met Kuo at the Jonathan Levine Gallery in May of 2007 when he was wearing his "lucky yellow shirt," which has since been retired. Introduced by a mutual friend (Thanks, Kim!) and chaperoned late into the night (Thanks, Jeff!), Rivera made his move by hanging around until everyone else in the party left, sharing whiskey at Williamsburg's Barcade, then lingering yet longer as the group wandered down the block to Alligator Lounge—you can't beat a free pizza with every beer! Seriously.

Kuo, best known for her graphic design work and texting skills, seemed an odd match at first, but she entered her phone number in Rivera's phone, against all odds. Rivera was actually pretty slick about that whole encounter, I have to say, pretending like it should have been there when really it was just a clever ploy to get her digits while eating phở at a Vietnamese restaurant. Niiiice!

Her father, when asked for permission (after the fact), replied via Skype,"It would be my honor," while close friends said "Finally. Haha!" Joe Quesada could not be reached for comment.

Excited about the future, the couple attempted to celebrate at a bar in Manhattan's Upper East Side. Rivera, being a comic book artist, was wearing cargo shorts and sneakers, and so didn't meet the dress code. "Story of my life," he said as they walked, painfully sober, down Lexington. They eventually found a more welcoming establishment.

When pressed for plans about the future, the couple was annoyingly coy, but did say they would attend the Eisners in San Diego. Even if Rivera doesn't win any awards, he will surely be comforted knowing that he "liked it" and "put a ring on it."

This is Rivera's second exclusive contract, the first of which was announced in 2005.
Posted by Paolo Rivera at 9:00:00 PM
Email ThisBlogThis!Share to TwitterShare to FacebookShare to Pinterest