Daredevil #10 hits shelves today (and is available digitally as well). And while this cover has been around since last year, I thought I'd feature some of the reference that went into it.

I've posted these Sculptris maquettes previously, but for this cover, I tried using them in concert with another great (and free!) 3D program: Blender. I don't think it will become part of my typical work flow—it has almost too many features—but it made sense for this particular image (and besides, I wanted an excuse to experiment and learn the basics). 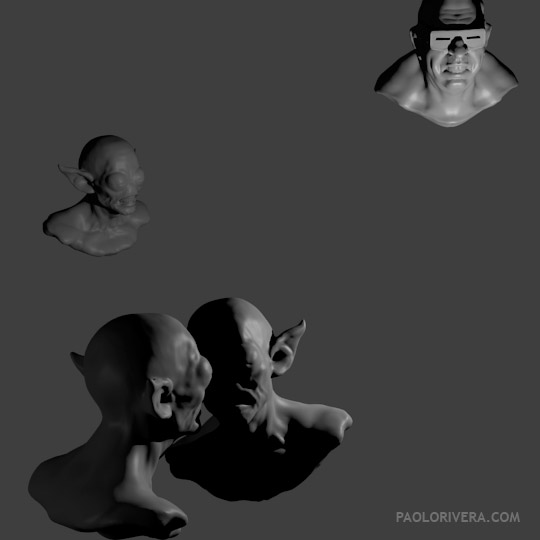 It was fairly simple to stage this scene by importing my maquettes and arranging them about a single light source. As you can see, the busts provided enough information to extrapolate shadows and render the full figures. This can actually be done in Photoshop CS5 Extended as well, but I find the interface a bit slow; its 3D capabilities are an added feature, not the main focus.

This faux-engraving style required such precision that I decided to ink it myself. My Dad could easily have inked it, but we'd essentially be doing everything twice, which would defeat the purpose of our assembly line process. Knowing that ahead of time, I penciled it completely in blue, which saved me from erasing anything prior to scanning. Total time was about 70 hours, some of which was recorded with the help of Mike Furth and The Comic Archive.