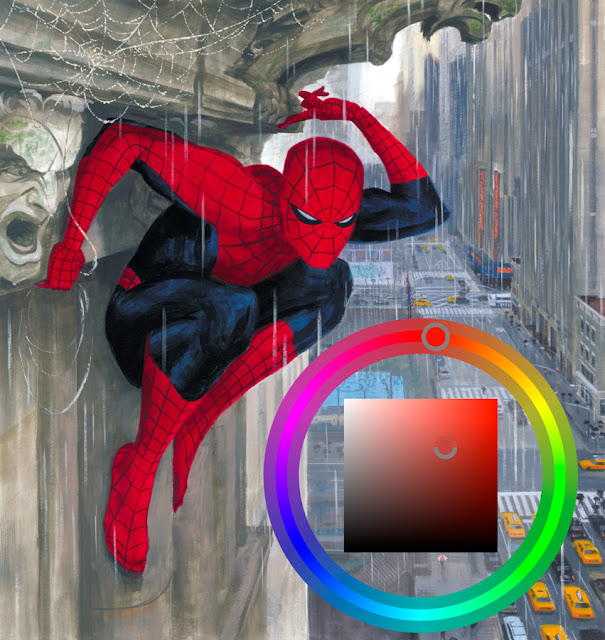 Here's a quick tip for those of you running Adobe CS5 with a Wacom tablet. The latest version of Photoshop features a heads-up display (HUD) that makes color selection easier than ever. To access it, however, 3 buttons must be pressed in concert with a pen click (control, command, and option (on a Mac)).

Hoping to simplify the process, I reprogrammed my pen eraser to "press" the buttons for me. I never use the eraser anyway, so the added functionality was a boon to my color studies. 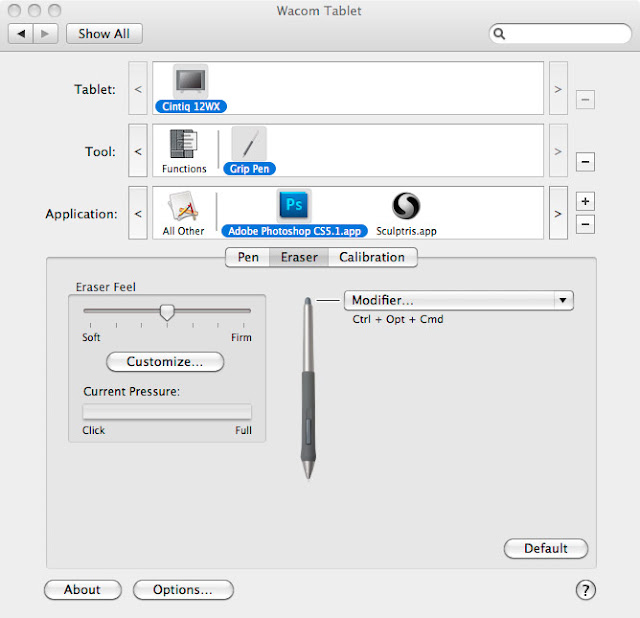 The screen grab above shows what settings are necessary to enable the customization. For a full explanation, check out this Wacom video tutorial (part of a larger series). I'm using a Cintiq 12WX, but the same rules apply.

In case you haven't heard, the first Daredevil trade is out in stores (here's a glowing recommendation). I've got my copy and it's a pretty handsome volume (if I may say so). It includes a couple interviews, preliminary sketches, and a step-by-step feature of my page process, not to mention the first 6 issues of our relaunch. If you're not near a comic shop, it's also available via my Amazon store.

Next week, The Twelve #9 continues the story that started in 2008. I provided a hard-to-ignore cover for the issue. My apologies. Although I painted (and posted) this a while ago, I gave the file a minor facelift, improving the color and contrast with Photoshop. I've learned a few tricks in the last few years, resulting in a truer representation of the original artwork. It's tough to say how your individual computers will portray the difference, but I thought I'd show jpegs of the 2 versions.

One trick I that helped was copying the background, pasting it on a layer above, blurring it, and lowering the opacity according to taste. This lessened the splotchiness of the paint strokes, which tend to be exaggerated by the scanner (and my own heavy-handed contrast adjustments). The other issue was CMYK conversion, a larger subject that I tackled in a previous post.

Rounding out the news, I'm about a quarter of the way through Daredevil #10 and things are going great. And if all goes according to plan, I'll be making a trip to my alma mater, RISD, next week to give a lecture. Should be fun. Have a great weekend!
Posted by Paolo Rivera at 6:41:00 AM
Email ThisBlogThis!Share to TwitterShare to FacebookShare to Pinterest
Labels: Covers, Daredevil, Painted
2 comments


I'm skipping Wacky Reference today because I've got a demo video to share with you, courtesy of Mike Furth and The Comic Archive. We documented the creation of this cover from start to finish, including multiple interviews and an unabridged time-lapse recording of the painting process. Running time is 30 minutes, split into 3 parts, and we cover quite a bit of material. Here's the link. Hope you enjoy it. 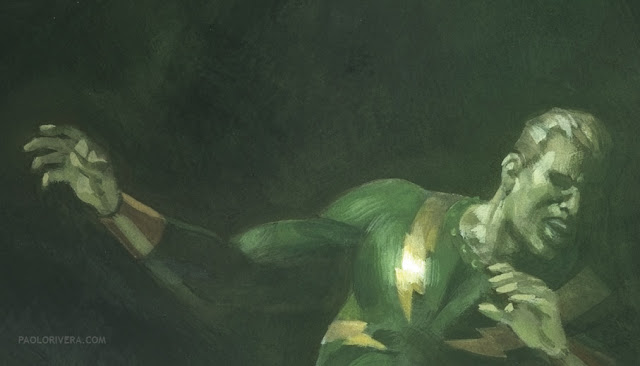 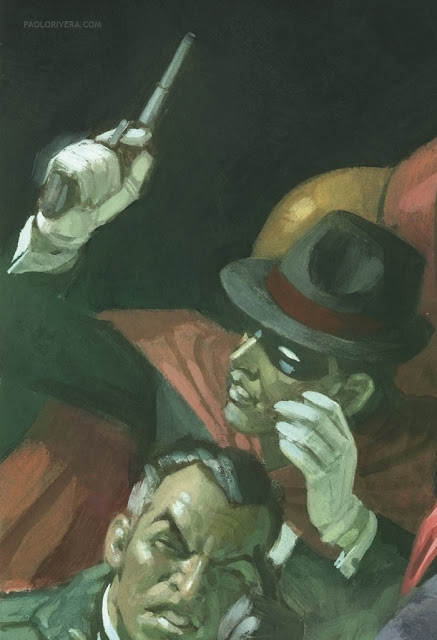 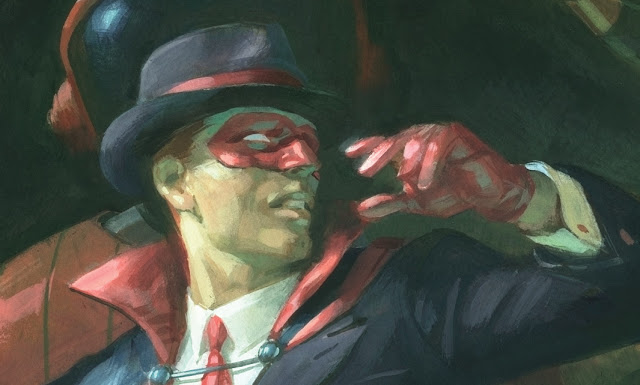 
In case you missed it via Twitter, there's a 3-page, unlettered preview of Daredevil #9 on Comic Book Resources. Above is the inked version. This story has been a blast—I'm working on issue 10 at the moment—and I can't wait to draw more Mole Man. And in case you were wondering, dark caves are pretty much the easiest thing on earth to draw.

In other news, Mark Hay at Splash Page Comic Art, my exclusive art rep since 2004, has revamped the site, and is now on Twitter. Please follow him! I try to post whenever new work is available for sale, but if you know of a piece that you'd like to purchase, please let him know.

Have a great weekend!
Posted by Paolo Rivera at 9:32:00 PM
Email ThisBlogThis!Share to TwitterShare to FacebookShare to Pinterest
Labels: Daredevil, Inked
0 comments

Daredevil #8 — On Shelves (Digital Too!)

I totally forgot! Daredevil #8 is out today with art by Kano and color by Javier Rodriguez. Mark Waid concludes this 2-part crossover (starting in Amazing Spider-Man #677), setting the stage for a subterranean tussle with the Mole Man. It's a great story, and it's now available digitally!
Posted by Paolo Rivera at 12:56:00 PM
Email ThisBlogThis!Share to TwitterShare to FacebookShare to Pinterest
Labels: Covers, Daredevil
2 comments


This was a fairly complex page to set up, but aside from Cloisters and wedding reference, most of the figures were from my head. I needed some help on Daredevil's hand, though, as that angle always gives me trouble. Nothing a mirror in my parents' house couldn't solve. I should also note that I used to use a pipe for Daredevil's billy club. Now I use a rolled up piece of paper (which is easier on the neighbors when I drop it). 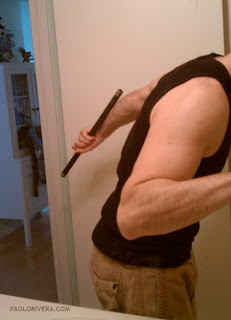 Howdy, folks! My apologies for the extended break, but deadlines demanded it. The good news is Daredevil 9 is finished (at least my part of it) and 10 is under way. Marvel already previewed a spread from the issue, so I thought I'd show a behind-the-scenes, penciled version. As you can see, blue line prints and pencils have become an integral part of my process.

I also wanted to send out a big and hearty thanks to the unbelievable number of comics sites that named us as one of the top comics of 2011. Seriously: I kept getting Google alerts for my name and I kept thinking it was for the same article. I really feel like I'm a part of something special here, and couldn't be happier with my collaborators.

Speaking of whom, I'd like to give special thanks to my Dad, who is inking his 100th page of Daredevil today. Here he is—complete with pro badge—signing his very first comic at the 2011 New York Comic Con. Congrats, Paw! 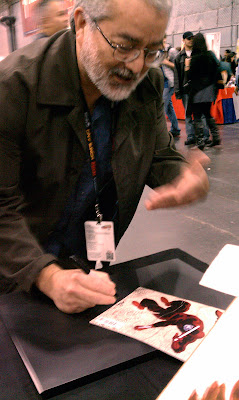