I don't think I posted this one yet. It was released into the wild in the midst of the New York Comic Con, which was, to say the least, a busy week. If you haven't heard yet, issue 8 will be part of a two-issue crossover with Amazing Spider-Man. I'm providing the cover, with Kano on interior duties. I'll be back for issues 9 and 10. By then, it'll already be 2012.

The second image is the digital composite, a stage in which everything is refined, from perspective to composition to anatomy. It's color-coded to help make sense of all the overlapping elements. This image is then printed onto board, providing a faint foundation for the subsequent stage (you can barely see the grid underneath the pencil scan). The other advantage of color-coding is that no erasing is required; Photoshop can easily remove everything but the graphite.
Posted by Paolo Rivera at 6:37:00 AM
Email ThisBlogThis!Share to TwitterShare to FacebookShare to Pinterest
Labels: Color Studies, Covers, Daredevil, Digital Color, Inked, Penciled, Step by Step
6 comments

Thanks to Christine and Josh for stopping by the table. And if you get a chance, check out Reilly's new creator-owned comic, Power Play.
Posted by Paolo Rivera at 8:46:00 AM
Email ThisBlogThis!Share to TwitterShare to FacebookShare to Pinterest
Labels: Conventions, Interviews, Video
0 comments


Cap shows off his DD skills in Daredevil #2. And I show off my camera phone. Whenever I'm unsure of a pose, I always do it myself to see how it feels. Sometimes, however, I have to break it up into separate shots to make the process faster.

Another time-saver is the addition of digital elements, such as Daredevil's chest emblem or Cap's shield, which can be seen below. It saves me from drawing repetitive, intricate things—and my Dad from inking them.


The original pages from Daredevil are finally posted on Splashpage Comic Art. If you are interested, please contact my representative, Mark Hay, and he'll be happy to assist you. And if you're not interested in purchasing, you're more than welcome to peruse the pages, though you may notice some are already missing!

Most of the pages consist of separate pages—my pencils/my Dad's inks—and the price includes both. Scans of the pencils are available upon request.
Posted by Paolo Rivera at 9:00:00 PM
Email ThisBlogThis!Share to TwitterShare to FacebookShare to Pinterest
Labels: Daredevil, Inked
0 comments


Although I already posted this on Twitter, I'm sure there are some blog readers who haven't seen it yet. I think this is one of my favorite commissions. It pretty much encompasses all of my interests. I'm a big fan of disco balls and hoop earrings. 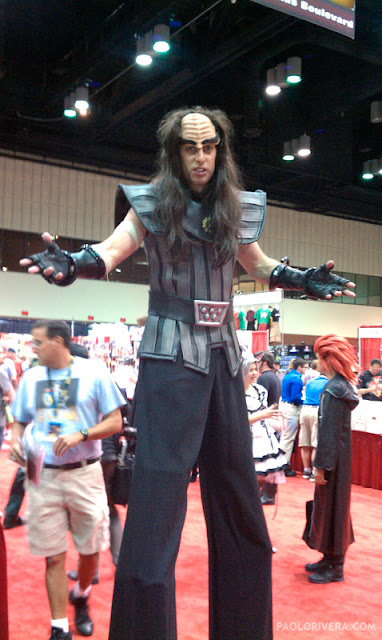 Posted by Paolo Rivera at 6:29:00 AM
Email ThisBlogThis!Share to TwitterShare to FacebookShare to Pinterest
Labels: Conventions, Photos
0 comments


The New York Comic Con has come and gone. It was absolutely exhausting, but I was able to paint a decent amount of commissions, all the while hosting my 'rents, who were visiting for the weekend. Aside from seeing a treasure trove of old friends, my weekend was filled with Daredevil fans who were not shy about showering the new series with praise. I can't thank you all enough for the kind words and continued support. The first 4 issues are all getting second printings, and that's all thanks to you!

I managed to get the above head shot finished just before the con. The patient commissioner had been on my list for nearly 3 years, so I was more than happy to  put a check next to his name. When he mentioned the yellow costume, I jumped at the chance, never having painted (or drawn) it before.

I tend to be pretty conservative with my convention portraits, but since I did this at home, I chose to paint ol' horn-head lit from below. To assist me in that pursuit, I enlisted my new digital Matt Murdock maquette, which I sculpted in a wonderful (and free) program called Sculptris. I've been promoting it on Twitter for some time now, but this is the first time I've mentioned it here. Download it. Please. This is the greatest sculpture tool I've come across since Super Sculpey.

The app — a lil' sister to Pixologic's ZBrush — is worthy of its own post, but I hope this quick intro is enough to convince some of you to experiment with it. It's already making my constant quest for reference a little easier.
Posted by Paolo Rivera at 9:00:00 PM
Email ThisBlogThis!Share to TwitterShare to FacebookShare to Pinterest
Labels: Conventions, Daredevil, Painted, Pin-Ups, Sculpture, Wacky Reference Wednesdays
4 comments


The New York Comic Con is almost here! I will be in Artist Alley all weekend and I've listed all my pertinent information below, including commissions policy and signing times. There will be a charity auction for St. Jude Children's Research Hospital on Friday and the lovely April O'Neil, pictured above, will be my contribution.

My original art is available at Splashpage Comic Art, booth 1175.
I may or may not be in costume on Saturday.

I will be accepting a limited number of 9 × 12″ watercolor portraits at the show. The cost is $100 and I'll start a new list at the beginning of each day (which typically fills up within the first hour). I reserve the right to pick names at random from the list or to choose the commissions which interest me.

I can't paint on blank covers, unless it's over line art. My apologies! Black and white head sketches are $40. If there's a print you're interested in, please contact me via the blog.
Posted by Paolo Rivera at 8:52:00 PM
Email ThisBlogThis!Share to TwitterShare to FacebookShare to Pinterest
Labels: Conventions, Painted, Pin-Ups
5 comments


New York Comic Con is just around the corner. Here's a commission from last year's show that I only finished recently. I haven't read the new series from Marvel, but the artwork from Emma Ríos looks simply amazing.

I'll have my schedule and pertinent information for the show posted on Wednesday. I may even dress up for one of the days of the con. You've been warned.
Posted by Paolo Rivera at 7:30:00 AM
Email ThisBlogThis!Share to TwitterShare to FacebookShare to Pinterest
Labels: Painted, Pin-Ups
2 comments

This cover was drawn primarily from imagination, but (as usual) I needed some help with one of the hands. Had this been a painting, I might've donned the claws, or bothered to light the scene, but being primarily an anatomy shot, none of that was necessary.

This is the first time (and so far the last) that I tried using a painted background with an inked figure. It definitely has a different feeling than the rest of my work, but I was never quite happy with the end result. I might try it again someday.