I've been sitting on this one for about a year now, so it's nice to be able to finally post it. I'll do a process post at a later date, but here is all the reference I used for the painting. As you can see, I use anything and everything that can give me some idea of how light reflects off of different materials. 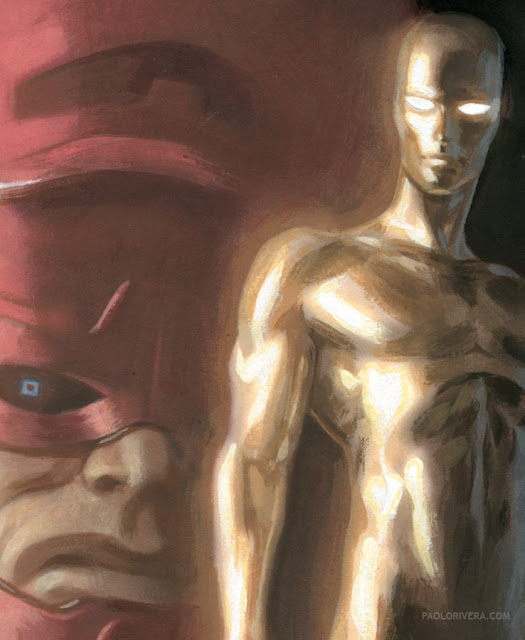 
I finished this recently, though it was from last year's con. I don't normally do fully-rendered painting on comic covers, but since I was able to take this home with me, I used acrylic paint, which has a lot more coverage power (as compared to watercolor). Red metal is fun to paint. Yep.
Posted by Paolo Rivera at 9:00:00 PM
Email ThisBlogThis!Share to TwitterShare to FacebookShare to Pinterest
Labels: Conventions, Painted, Pin-Ups
2 comments


Just a quick update: Daredevil #7 will be in stores this December and this is the cover to look out for. I'm amazed Marvel let me do it, but I'm glad they did.
Posted by Paolo Rivera at 7:16:00 AM
Email ThisBlogThis!Share to TwitterShare to FacebookShare to Pinterest
Labels: Covers, Daredevil, Digital Color, Inked
0 comments


I never thought the day would come, but I'm having a harder and harder time finding "wacky reference." Since I don't paint as much now (and can draw better than I used to) I have less need for it than early on in my career. That being said, I'll keep posting pics as long as I've got 'em. Nowadays, it seems I only take pics of hands (and only for poses that I can't draw from life).

The buildings in the background are mostly based off of Google Maps and Street View. You won't find this exact shot anywhere on their servers (although it's probably just a matter of time); rather, I use real intersections as inspiration to "beef up" the detail of my initial concept. By the way, the secret to drawing vast cityscapes is to cover most of the windows with anything you can, from characters to signs to inset panels. There. I said it.

In other news, I just finished my 75th cover for Marvel: The Twelve #10, starring Electro. I had a lot of fun painting it and it should be solicited shortly. Just one more to do and that'll wrap up the whole series. I've also started on Daredevil #7, the cover for which should also be posted soon. And by the way, Daredevil #4 comes out today, featuring the marvelous Marcos Martin. It's well worth the cover price (full disclosure: I read it for free).


We're getting closer and closer to the New York Comic Con, so I figure I had better post all the commissions from last year. I'm only doing 2 conventions this year, but I might try to step it up in 2012. We shall see.

Thanks to everyone who came to the Hanley's signing!
Posted by Paolo Rivera at 7:01:00 AM
Email ThisBlogThis!Share to TwitterShare to FacebookShare to Pinterest
Labels: Color, Conventions, Painted, Pin-Ups
0 comments 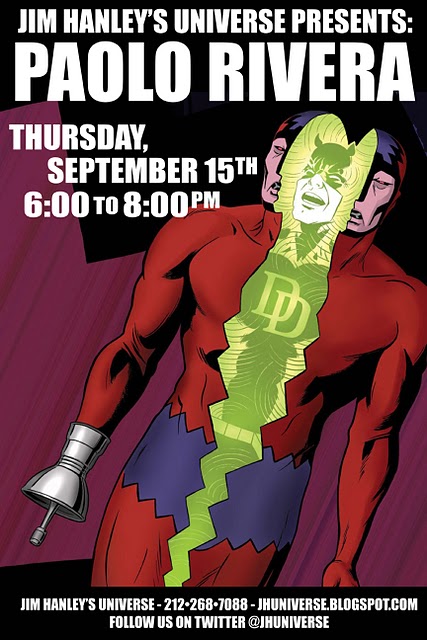 I have safely returned from my Western quest and will be signing this evening at Jim Hanley's Universe from 6-8. My spirit animal is the comic book.
Posted by Paolo Rivera at 7:03:00 AM
Email ThisBlogThis!Share to TwitterShare to FacebookShare to Pinterest
Labels: Appearances
0 comments


I am taking a real vacation—heading out West: CA, TX, NM—visiting friends and my substantial extended family. I'll be back on the 14th, just in time for my signing at Jim Hanley's Universe on the 15th.

I'm handing off the Daredevil reigns to the magnificent Marcos Martin for the next 3 issues, but I'll be back for issue #7, a Christmas special of sorts.

As for non-Daredevil work, I'm nearly done with The Twelve #10 Cover, my favorite of the bunch so far. I'm working with gouache in a more opaque manner now, so it resembles my earlier work in oil. Combined with the lurid, primary colors, it's a perfect match for the pulpy series. Can't wait to share.

Otherwise, I'll be taking a blog break as well. Peace out!
Posted by Paolo Rivera at 6:00:00 PM
Email ThisBlogThis!Share to TwitterShare to FacebookShare to Pinterest
Labels: Daredevil, Penciled
0 comments