I painted this commission while I was home in Florida (as if my parents didn't have enough reasons to think I'm weird). It was a nice change of pace, though—I always enjoy requests that are off the beaten path. Although, I must say, I can't get a good read on his expression. It looks like I caught him off-guard at a party about to smile... like if we panned out a bit, we'd see a beer in his hand (the non-gloved one).
Posted by Paolo Rivera at 9:00:00 PM
Email ThisBlogThis!Share to TwitterShare to FacebookShare to Pinterest
Labels: Color, Conventions, Painted, Pin-Ups
2 comments


Although I usually try to limit the sketch cover commissions to black and white head sketches, I had a little more time (and motiva$ion) to render a half-figure. The paper that is typically used for these custom covers is good enough to draw on, but not really absorbent enough for watercolor, my medium of choice for conventions since it doesn't require immediate brush cleaning. Because I was able to take this one home, I used Holbein's Acryla Gouache for the color accents. The only trick is that it must be applied before the ink since the the paint is, by its very nature, opaque.

Aside from that, I'm still plugging away at my secret project which should (hopefully) be done next week. That'll be just in time to start my next project... which will also be secret for the time being. Have a great weekend!
Posted by Paolo Rivera at 9:00:00 PM
Email ThisBlogThis!Share to TwitterShare to FacebookShare to Pinterest
Labels: Color, Conventions, Inked, Painted, Pin-Ups
3 comments


Some of you may remember—way back in the NBC days—when Conan kindly let us use his likeness in our retelling of Amazing Fantasy #15. For Spidey's pose at the bottom, I took a series of photos of my own reflection and pieced my favorites together in order to get the gesture I wanted. The spotlight effect was a product of my imagination, but having the photo reference provided the foundation on which to project. Because I couldn't see the camera screen, the first few pics were taken to ensure a decent composition. 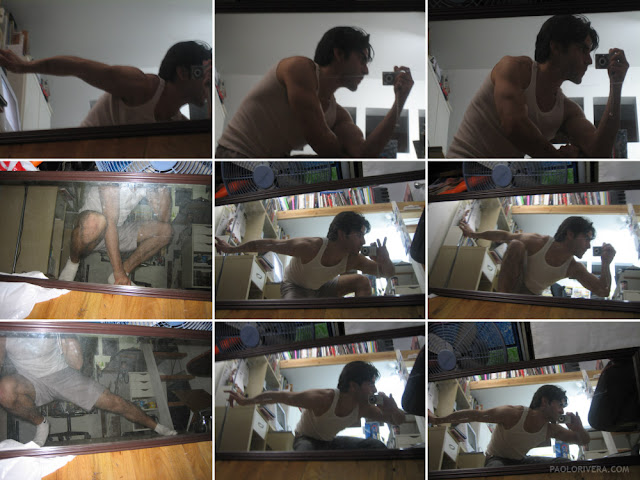 
I thought I'd stick with the Avengers theme today and feature another member of the team. While I have no idea what the movie version of Hawkeye will look like, this is my take on the classic archer. The head study was completed after the convention in the comfort of my own home, which meant I could spend a little more time on it. I believe this is only the second time I've painted Hawkeye, the first being a cover for his own series, way back in 2003.

In other news, I made it back from my skiing trip in one piece and had a great time. This was my second trip to Lake Placid, but the first with snow on the ground. I wish I had taken more pictures, but I was afraid I'd drop my camera phone from the lift.
Posted by Paolo Rivera at 3:41:00 PM
Email ThisBlogThis!Share to TwitterShare to FacebookShare to Pinterest
Labels: Color, Conventions, Painted, Pin-Ups
6 comments


A new Thor trailer just debuted, so I thought it would be a good excuse to show a recent study of the cinematic Avengers (they're mostly based on the concept art that made its way on-line last year). I haven't really read any Thor comics, but I'm still excited for the movie. I like what I've seen so far and I can't wait to see them all on the screen together.

In other news, I'm leaving today to go skiing for the first time. Gonna take some lessons... and take it easy. Have a great weekend! 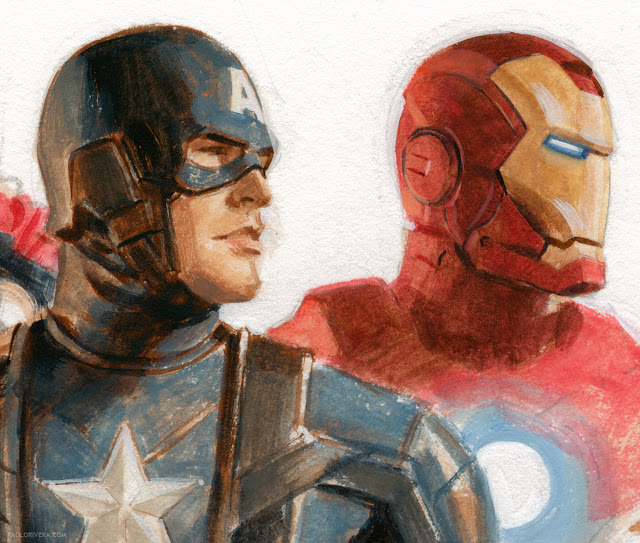 
I'm still in a Captain America mood, so here's some reference from the second page of his Mythos origin story. This is a montage of sorts, taking Steve Rogers from a year old (in the family photo from panel 2) through childhood and up to draft age. I posed for most of the characters on the page with the exception of Steve's mother's hands. You can see the previously posted reference here and here. 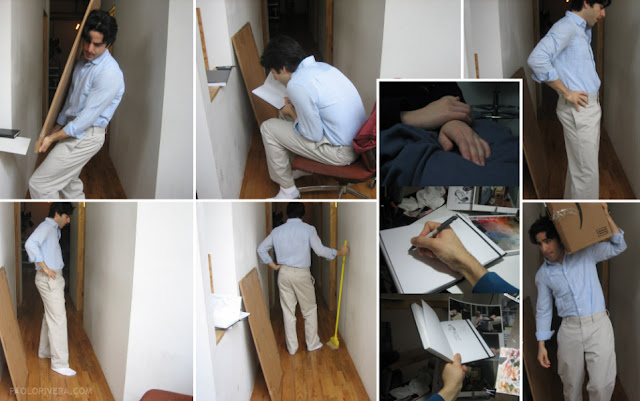 
If you haven't heard, a new X-Men movie is coming out this year, and the first trailer just premiered on-line. While it looks promising, they pretty much had me at January Jones. As if setting the the story during the Cuban Missile crisis were not enough, they've cast the Mad Men star as Emma Frost to round out that 60s style. Throw in some Kevin Bacon as Sebastian Shaw and I'm there. Pictured above is my own take on the X-Men's "First Class." I can't believe I painted this six years ago.


Here's the last of the Fan Expo commissions from August. I painted this in my hotel room while taking a break from the con floor (my apologies to anyone who stopped by during that period). Next up will be the batch from the New York Comic Con (about a dozen in all). I also have 3 new covers to show, but I don't know when they'll be made public. I still haven't gotten to any sequential work, but I'm in the midst of my super-secret project right now. It's easily one of the coolest things I've ever worked on and I'm having a blast. Painting starts today.

Have a great weekend!

P.S. Thwip! I thought I'd share this one last photo from Toronto—Spider-Artist (me), Spider-Man, and Spider-Editor (Steve Wacker). I like how Spidey brought his game-face to the picture. 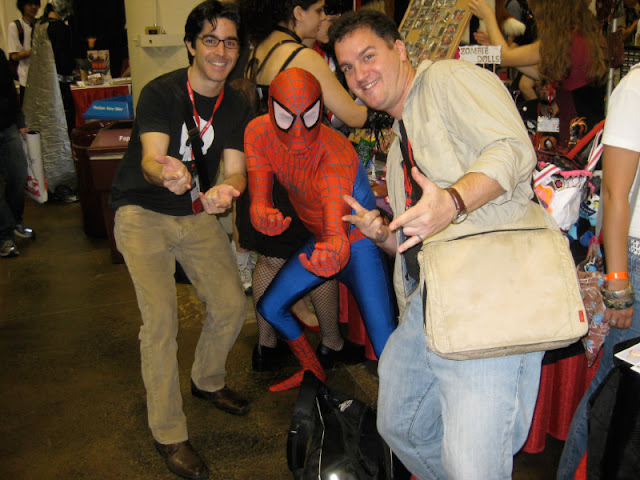 
I'm still in a Captain America mood, so here's a panel from his issue of Mythos. It's an absolutely riveting scene in which Steve Rogers eats some carrots. I think I'll round out the week with a Cap head sketch, my last from the Toronto batch.


If you didn't get to see it during the Super Bowl, here's the teaser trailer for Captain America: The First Avenger. Call me impressed, not least of all because they managed to make Chris Evans into a convincing skinny dude—not an easy task for a single image, let alone a moving picture. The action looks great, as I would expect, and I must say I'm pretty excited to see this.

Pictured above is my painted study of Chris Evans based on an Entertainment Weekly cover. This is part of a page of studies, each of which I'll post upon competion. In the meantime, be sure to check out the official movie site, where you can download the first issue of Captain America: First Vengeance by Fred Van Lente, Luke Ross, and Richard Isanove (with a cover by me!).


I'm going to the Super Bowl! Well, sort of. Actually, I'm not really sure. Here's what I do know: I provided the cover for Captain America: First Vengeance, a movie tie-in that will debut, along with the movie's first trailer, during the Super Bowl. Marvel recently announced that the comic will be made available for free at the movie's official site, captainamerica.com, on Sunday. Finally, a reason for me to watch football (my apologies to all you fans out there—I actually love watching the Super Bowl... I just don't follow sports and never have any idea who's playing).

When I first painted the image, I had only as much reference as was widely available on the internet, which consisted of an Entertainment Weekly cover, concept art, and low-res pics of a stunt man on a motorcycle. In other words, I didn't know exactly what the helmet looked like, and so did the best that I could with what I had. Just prior to the cover's on-line debut—and after the helmet was revealed—my editor asked for a revision with more faithful details. But I don't think I was fast enough; it looks like the image they used in the press release was a Photoshop fix. We'll have to wait and see which version makes it to the digital comic.

In other news, I'm heading up to Providence today to give a lecture at RISD, my alma mater. This will be the third year I've done so for my long-time friend and colleague, R. Kikuo Johnson, who teaches a winter-session comic book storytelling class. I hear I may be meeting a certain Marvel movie celebrity as well. I'll try and get pics, but no promises. Have a great weekend!
Posted by Paolo Rivera at 9:00:00 PM
Email ThisBlogThis!Share to TwitterShare to FacebookShare to Pinterest
Labels: Color, Covers, Painted
13 comments

Via Science Friday.
Posted by Paolo Rivera at 9:00:00 PM
Email ThisBlogThis!Share to TwitterShare to FacebookShare to Pinterest
Labels: Video
0 comments


I had recently purchased a Droid Incredible smart phone, complete with 8-megapixel camera, when I finally got around to painting this commission. I quickly realized that I could speed up the reference-taking process by shooting photos with my phone and emailing them to myself. Gone are the days of printing out tons of photo reference; I now store it all on my iPad and paint directly from it. Since I can navigate albums and scale photos with just one finger, it frees up precious desk space while reducing paper and ink consumption (not to mention clutter). Technology doesn't really change what I'm doing, but it can certainly make it easier. 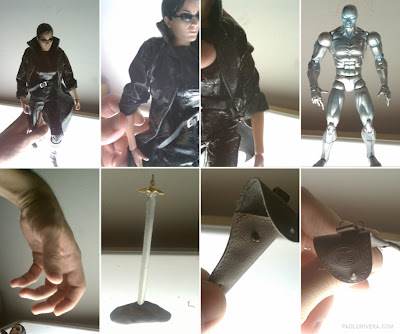 As for the pics, I set up some simple props on my light box to get the appropriate under-lighting. As I often mention, I'm looking for ideas about lighting to inspire the finished product. The most loyal translation is probably in the left hand, which bore the closest resemblance to what I had wanted. Everything else was used as a loose foundation. You can see the entire painting process in my previous post.
Posted by Paolo Rivera at 9:00:00 PM
Email ThisBlogThis!Share to TwitterShare to FacebookShare to Pinterest
Labels: Color, Painted, Photos, Pin-Ups, Wacky Reference Wednesdays
5 comments