Some situations call for teamwork, and if Spider-Man and the Punisher can work together to achieve a common goal, then I think just about anyone can—including my old man and myself. This cover is the first taste of what I hope to be an ongoing collaboration: Joe-inks over Paolo-pencils.

Since my earliest days with the publisher, Marvel has consistently offered me amazing projects, to the point where I've had to struggle to keep up, even turning down fantastic opportunities in order to keep on schedule. While I have gotten slightly faster since 2002, I remain a fairly slow artist. And even when I made the expedient switch from painted work to line art back in 2008, I still couldn't relinquish control over the inking stage. This has limited my options to short story arcs and one-shots. I hope to change that this year.

Last summer, when discussing my speed issues with my 'rents, we slowly came to the same idea at the same time. And the more we talked, the more it seemed to make sense. For those of you who don't know, my Dad has painted custom motorcycles in Florida for 16 years, and has been drawing and painting for much, much longer than that. He uses an airbrush for almost all of his work, but he's also quite comfortable with a kolinsky sable. In fact, he can even use an airbrush to mimic an inked style (not an easy task) as evidenced in the Nightmare Bike, a trike based on the work of Bernie Wrightson (who wholeheartedly approved when I showed him the pics). 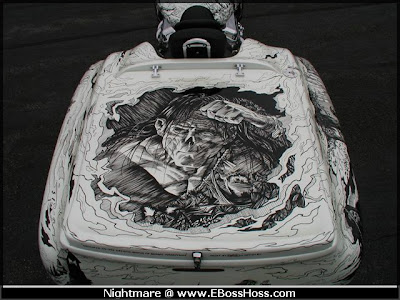 For now, my Dad will be inking as my assistant (which, to be honest, is a little weird) so his name won't be appearing in the credits. This is mostly to make the transition easier and faster, and to make sure everything runs smoothly for all involved. We're right at the beginning here, so we've still got to prove ourselves on something long-term, but he's been practicing for a few months now, painstakingly retracing blue-line prints of my pages, over both pencils and finished inks. I couldn't be more proud!