Unable to give up on his Aunt May, Peter Parker rushes past the doctor to try to resuscitate her. Joe Quesada, the writer, had a particular pacing in mind for this scene, and so dictated the panel arrangement accordingly. He also requested the EKG sound effect, which I drew separately, and duplicated digitally (or at least my assistant, Orpheus, did). I knew I wanted the scene in heavy shadow, so I left the room's sole light source outside in the hallway.


This is the second of 5 Fantastic Four anniversary covers that will be used for various titles. I believe this will be on the cover of X-Men #245, which hits shelves in February. It was a pleasure to use green for a change, which doesn't happen too often. I even had to reorganize my palette to accommodate the shift in hue. Also, as you can imagine, this will provide plenty of fodder for Wacky Reference Wednesdays.

Later today, I'll be giving a painting demonstration at Pratt for Jim Hoston's illustration class. While it's not open to the public, there's a chance I might be able to tape it. I was able to record my lecture in Toronto, but the audio wasn't good enough to merit posting it here.
Posted by Paolo Rivera at 9:00:00 PM
Email ThisBlogThis!Share to TwitterShare to FacebookShare to Pinterest
Labels: Color, Covers, Painted
6 comments


Although this piece was commissioned at the Fan Expo in Toronto, I didn't actually complete it until I returned home to Brooklyn. This allowed me to try some opaque acrylic techniques, since I limit my media to watercolor at conventions. I posted this previously on Twitter, but I figured it wouldn't hurt to have it here as well... maybe it does.

I've been working on a pretty cool cover for the better part of the week. I have a hunch people will like it—you can't go wrong with putting several popular characters in one place. I don't know... maybe you can.

Also, I wanted to mention that I've opted to share my blog photo stream publicly. Google's Blogger uses Picasa Web Albums for on-line storage, so there won't be anything new if you've been following this blog for some time. That being said, it's much easier to browse since everything is in a centralized location, complete with thumbnails.

And finally, I'm heading to Texas for most of next week (Houston, San Antonio, and Austin), so I'll be taking a blogging break for the duration. Have a wonderful weekend and a happy Thanksgiving.
Posted by Paolo Rivera at 9:00:00 PM
Email ThisBlogThis!Share to TwitterShare to FacebookShare to Pinterest
Labels: Color, Painted, Pin-Ups
3 comments 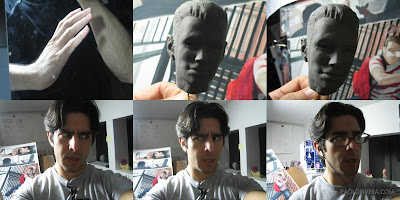 In this scene from Mythos: Spider-Man, Peter Parker's newly-acquired Spider powers allow him to dodge a speeding car by leaping up a wall. I had a tough time with his face, trying just about everything to get it right. Years later, I'm still not happy with the result, but at least I got the expression I was going for. You can see below that I gave up in the pencil stage, thinking I could "fix it later." Sometimes this strategy works, but it's usually easier to solve problems of draftsmanship before the application of paint.

Photos I Felt Weird About Afterwards


Here's some more Hellboy, this one done just prior to the New York Comic Con. I've gotten just one commission done this week (Hawkeye), so I'm slipping a bit behind. However, I'm still chipping away on a handful of projects that nobody will ever see (at least not for a long, long time), including some work "on spec." I hope I get the gig, but the competition is stiff.

Have a great weekend!
Posted by Paolo Rivera at 9:52:00 PM
Email ThisBlogThis!Share to TwitterShare to FacebookShare to Pinterest
Labels: Color, Painted, Pin-Ups
5 comments


Happy Veterans Day, and thank you to everyone who has served. If you're looking for a way to help support our troops, I hear more than a few of them like comics. At anysoldier.com, you can find out how to send them just that (or whatever else they may need—the simple things can quickly become luxuries in the line of duty).
Posted by Paolo Rivera at 9:00:00 PM
Email ThisBlogThis!Share to TwitterShare to FacebookShare to Pinterest
Labels: Color, Mythos, Painted, Sequential
2 comments


In this scene starring the Kingpin, all that was needed was a little hand reference. I really enjoyed drawing him and would love to tackle the character in the future. I'd also love to wear socks with sandals for the rest of my life. 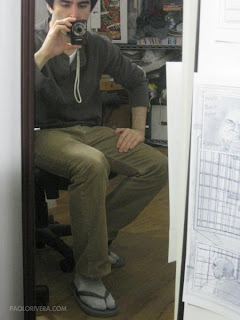 
According to Marvel's web site, the One Moment in Time hardcover collection will be out tomorrow, so if you missed it the first time, now is your chance to catch up. Amazon is selling it as well, but the release date is November 24th.
Posted by Paolo Rivera at 2:00:00 PM
Email ThisBlogThis!Share to TwitterShare to FacebookShare to Pinterest
Labels: Color, Covers, Painted, Spider-Man
3 comments


Marvel has a new promotion called "Point One" in which select titles will boast an extra issue tailored toward new readers. When they asked me to provide the cover for Wolverine, I was more than happy to oblige. The cover had a tight deadline, so I had to keep things fairly simple, but the graphic approach probably helped the composition in the end. I'll detail the full process in a later post, but the background was painted separately (and at a smaller size), then merged in Photoshop.
Posted by Paolo Rivera at 9:35:00 PM
Email ThisBlogThis!Share to TwitterShare to FacebookShare to Pinterest
Labels: Color, Covers, Digital Color, Inked, Painted, Photoshop
6 comments


It may have taken over 2 years, but I finally finished this Hellboy commission. The scene is based on a key moment from The Wild Hunt, by Mike Mignola and Duncan Fegredo, 2 of my favorite comic creators.

Beyond that, I finished 3 head sketches this week, all of which I'll be sending out today. For those of you still waiting, thank you for your patience—I'm shooting for getting 3 done per week until they're all done. As for "work-work," I can't yet reveal the Marvel project I've been chipping away at, but it's pretty cool. Once that's completed, I can get going on my next Spidey issue with Dan Slott, which I'm really excited about.

If time permits, I may (may) go to the King Con in Brooklyn this weekend, though not in any official capacity. But if you see me, feel free to say "hi." I'll try not to be ornery. Have a great weekend! 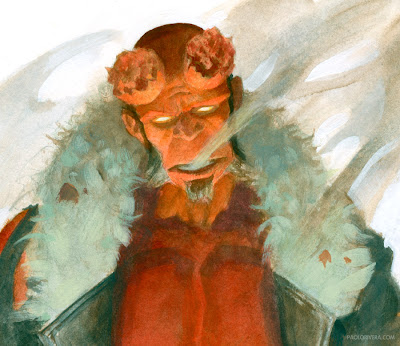 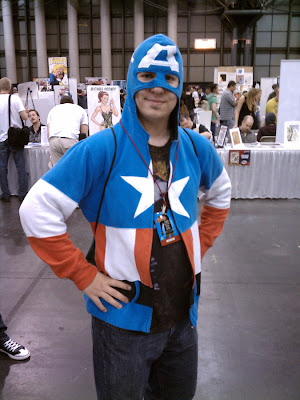 Posted by Paolo Rivera at 11:25:00 AM
Email ThisBlogThis!Share to TwitterShare to FacebookShare to Pinterest
Labels: Conventions, Photos
5 comments


As I've mentioned many times, simple interaction among characters is often the hardest to reproduce because subtlety is paramount. This is where acting and role playing is most useful, since these actions are second nature to do, but not always to create. We are very adept at recognizing gestures, which is why drawings can so easily look awkward—not everyone can draw a figure, but almost everyone can "read" body language, however understated. The height at which we hold a cup, the angle of each finger as it grasps the handle, the tip of a sip—these and every other element add up to create a wholly believable character. 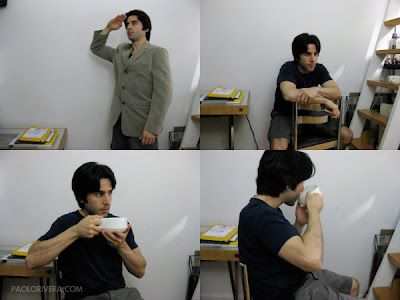 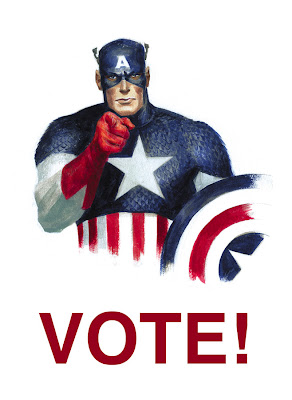