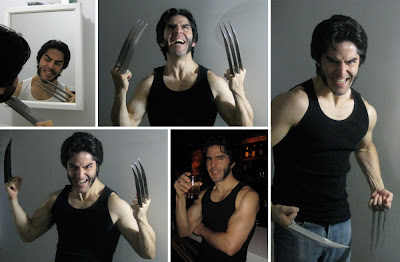 In case anyone was wondering, I am a nerd. Here are some pictures to prove it. The weekend was a success in that I didn't stab anyone and made it home safely each night. Unfortunately, I looked so lonely at the hotel bar that a waitress told me, quite emphatically, that I should talk to some girls—she even pointed some out. Didn't she know I was just brooding "in character?" I looked so out of place, in fact, that someone put a "Girl Issues" sticker on my back without my knowledge. Guess my mutant senses were dulled by the Maker's Mark.

Luckily, my good friend Trevor was there, making a pretty terrifying Joker (his girlfriend was Batgirl). As scary and unpredictable as the Joker is, he apparently still makes time to get his hand stamped. Reentry is no laughing matter. We also took a picture of Wolverine doing what Batman never could (gently massage his friend's chest).


October is almost over, but all I can seem to think about is how awesome my new Wolverine claws are. If you haven't seen, I've been going nuts taking pictures of myself and posting them on twitter. While they aren't as cool as the retractable ones I made in college, they certainly make up for it in the "posing a real danger to myself and those around me" category. I should probably lay off the sauce this weekend.

Pictured above is the always lovable Dr. Doom, one of my sketches from Toronto. I've plowed through about a quarter of the commissions I took on at the New York Comic Con, which I'll ship out today (thanks for your patience). Aside from that, I finished up 2 covers this week, both of which should be in next month's solicitations.

Have a happy and safe Halloween weekend... and I'll try not to stab myself with my own costume.
Posted by Paolo Rivera at 6:32:00 AM
Email ThisBlogThis!Share to TwitterShare to FacebookShare to Pinterest
Labels: Color, Conventions, Painted, Pin-Ups
4 comments 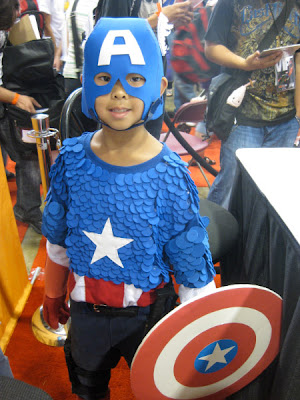 Three out of Fantastic Four ain't bad. Here I am portraying everyone but Sue Storm, who (fortunately) was modeled after the lovely Danielle (whose birthday happens to be today—happy birthday!).

I feel like I haven't shared any useful information here in quite some time, so here's a quick tip that might help some of you with perspective (and help me feel better about my blog).

When composing an image that requires perspective (most often architecture and inorganic forms) I find that using 2 pencil/eraser "teams" is a great way to preserve my construction lines throughout the course of a drawing. When drawing the initial guidelines, I'll use a sharp, hard lead (most often an H), but once the basic structure has been established, I'll switch to a softer lead (anywhere from HB to 2B) to do the bulk of the rendering. This stage requires the most trial and error—erasing, in other words—for which I use a kneaded eraser. This soft, pliable putty works by lifting loose graphite particles with a minimum of friction. Because of this, lines from the softer lead will disappear, leaving the perspective grid intact. Once the piece has been inked, a harder eraser can be used to remove all traces of graphite (Maped's Epure is my favorite for the moment).
Posted by Paolo Rivera at 9:00:00 PM
Email ThisBlogThis!Share to TwitterShare to FacebookShare to Pinterest
Labels: Penciled, Perspective, Sequential, Spider-Man, Technique, Tools of the Trade
5 comments


I'm not exactly sure what I was going for with this portrait. Perhaps siesta has just ended? Maybe a gust of wind has toppled her hat? It could be that she has just awoken from a night of magic. It's also possible that her corset is too tight.

As for me, I feel like I'm not getting enough done. I've got too many little projects in the works and not enough... aaand I'm tired of listening to the voice in my head that talks while I type. But, after all, I am the Self-Absorbing Man.

Posted by Paolo Rivera at 7:57:00 AM
Email ThisBlogThis!Share to TwitterShare to FacebookShare to Pinterest
Labels: Photos
0 comments


I don't get to do these kinds of scenes nearly as often as I'd like, but that's probably a good thing—no stories would get told. As for the reference component, I thought it was worth showing for how much I didn't use. Although a multi-figure composition with several panels, only 3 photos were taken, the rest drawn from imagination (and years of practice). The reason is fairly simple: most of the shots are close-ups, and none of the full-figures are grounded. Reference is most useful for interaction, whether it be a figure and the floor or two hands touching. As evidenced by the last photo, it's also great for extreme foreshortening. 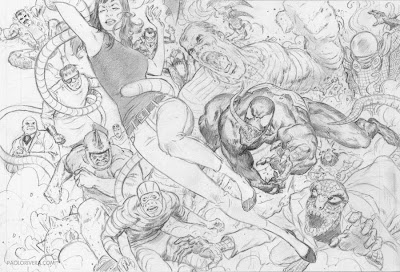 
Iron Man doesn't look too happy here—perhaps he's angry that I signed my name on his shoulder (and in blue, no less). But what I really wonder is how he manages to furrow his brow through a metal face plate.

I really can't believe it's already Friday. I haven't accomplished much all week besides cleaning up and recovering from the convention. I did, at least, manage to finish one head sketch. I took on over 20 names at the show, so I'll be getting to them shortly—I'm shooting for about 3 per week over the next couple months. I also began working on some layouts for my next Spidey issue, but nothing I can show just yet. What I can say is that the script is awesome.

I don't think anyone has ever questioned Joe Quinones' geek credentials (after all, he just reminded me that our first meeting was instigated by an impromptu light saber duel at RISD 11 years ago). But even if someone still had lingering doubts regarding his devotion to comic book and pop culture, those must now be relinquished.

At some point during the convention, a young man dressed as Cyclops stopped by the table to look at my art. Although he was wearing the blue costume, he was sporting the red glasses, as opposed to the visor. Joe, who was seated at the table next to me, told me afterward that when he saw Cyclops lower his "ruby quartz" glasses to get a better look at the artwork... he flinched.

Let me repeat and rephrase that: when Joe saw a guy dressed as Cyclops remove his glasses, his instinctual reflex was to brace for an optic blast. I am still laughing (kindly, of course). Trust me, that's precisely the kind of person you want drawing your comics.
Posted by Paolo Rivera at 9:56:00 PM
Email ThisBlogThis!Share to TwitterShare to FacebookShare to Pinterest
Labels: Color, Conventions, Details, Mythos, Painted, Sequential
8 comments


Again, I think I would make a convincing Mary Jane for the Spider-Man movie reboot. Please direct all inquiries to my agent. As you can see, the photo was taken more for gesture than angle, but I still wasn't completely happy with the final pose. All the other figures were drawn from imagination. 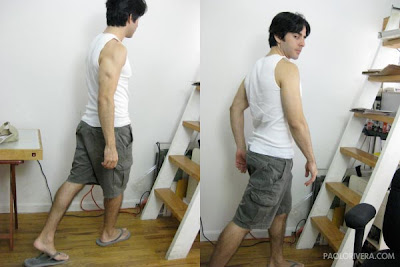 
Phew. New York Comic Con was a raging success. I am sick, and my brain is officially full, but it was well worth it. Let's pretend that today's post was published yesterday and that I'm back to my normal schedule. Thank you to everyone who stopped by—it's always a pleasure to meet the people who make my job possible.

The art above is my latest work, the first of 5 covers celebrating 50 years of the Fantastic Four. This is the team as they first appear, with a healthy dose of inspiration from Mad Men and my favorite 60s illustrators.
Posted by Paolo Rivera at 10:59:00 PM
Email ThisBlogThis!Share to TwitterShare to FacebookShare to Pinterest
Labels: Color, Covers, Painted
13 comments

My NYCC Schedule... and Batman


The New York Comic Con begins Friday, and I should, Zeus willing, be there all weekend. You can find me in Artist Alley, table G-7, right next to Joe Q(uinones). On Friday, I'll be signing with Joe Q(uesada) from 3-4 at the Marvel Booth.

I will be accepting 9 x 12" watercolor head sketch commissions for $80. I'll start a fresh list at the beginning of each day, but it fills up quickly (often within the first 15 minutes), so please get there early to ensure a spot (I may accept post-con commissions if I'm in a good mood). I'll be commuting from Brooklyn each day—at least an hour commute—so my apologies in advance if traffic holds me up.

I'm really looking forward to the show (the weather looks like it's going to be fantastic), so please stop by if you'll be in attendance. There won't be a post on Friday, so have a fabulous weekend!
Posted by Paolo Rivera at 8:22:00 AM
Email ThisBlogThis!Share to TwitterShare to FacebookShare to Pinterest
Labels: Appearances, Conventions, Inked, Pin-Ups
9 comments


I hear they've already cast Gwen Stacy for the next Spidey movie (with a beeyooootiful girl who looks exactly like Mary Jane, no less), but if they still need an MJ, I think I'd do a pretty decent job. Exhibit A: 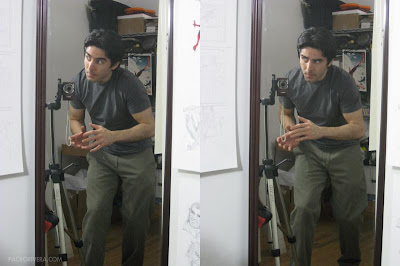 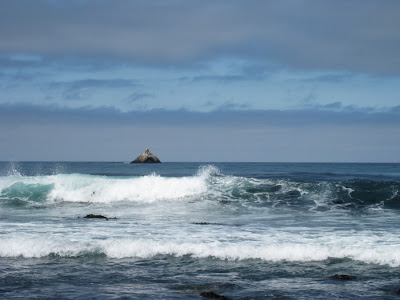 
I already posted this on Twitter, but I figured it was time to share on the blog. While I'm including this with the Fan Expo group of commissions, it wasn't actually completed until I returned to Brooklyn. Don't tell anyone.

New York Comic Con starts this Friday! I'll post all the pertinent information on Thursday so you'll know where to find me. In the meantime, I'll probably be in my room, painting away.
Posted by Paolo Rivera at 9:00:00 PM
Email ThisBlogThis!Share to TwitterShare to FacebookShare to Pinterest
Labels: Color, Conventions, Painted, Pin-Ups
12 comments