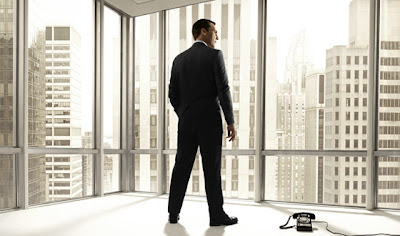 To the mad (and obviously face-blind) man I met in a Marriott elevator in San Diego: thank you — you made my day.

As I was leaving the hotel, a man with a large television camera entered the elevator. While we descended in silence, I could tell he was staring at me. He finally broke the silence and asked, "Are you Jon Hamm?"

Now I can't remember if I replied "Who?!" or "What?!", but either way, he replied as if it were a question, rather than utter disbelief. I knew full well who Jon Hamm was, as Mad Men is the only TV drama I watch (although I am woefully behind, having just finished season 2). I spoke to him for a little longer before basking in the glow of women's stares for the rest of the con. Perhaps now I won't feel so bad when my girlfriend has dreams about Don Draper. She can't help but talk in her sleep... 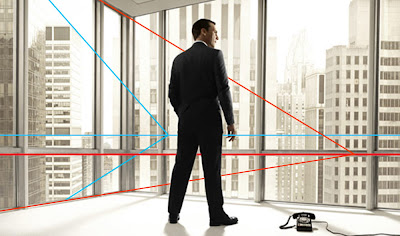 And while we're on the subject of Mad Men, let's talk about perspective (second best transition ever). As I was saying before, this is my favorite show. Their attention to detail and subtext in every shot is a joy to behold... which is why I was surprised to see this ad for season 4 in the subway station. It makes the common mistake of most Photoshop collages in that the horizon lines of the two photos do not match. The interior shot's eye level (the red line) is just below the window frame, whereas the exterior's (blue line) is just above. Furthermore, the building in which Don is standing is built at a pretty strange angle to the rest of the buildings. While there are some buildings that spurn the grid in Manhattan, there are not many, especially in relationship to surrounding structures. But that's not as serious an offense as the dual horizons, which could only exist if the building were leani... wait a minute... perhaps this is just subtext with a dash of foreshadowing.

Speaking of shadows (best transition ever), the light source for the interior should be a glowing orb, floating miraculously between the two buildings. Again, not a serious problem, just something that you pay attention to when constructing one image, but is easily missed when combining two.

Now, to be clear, I am insanely nit-picky and this ad is just fine (and beautiful), but it points to a common mistake in this post-production world we live in. That being said, Sal from the art department would never have let this slip.
Posted by Paolo Rivera at 9:00:00 PM
Email ThisBlogThis!Share to TwitterShare to FacebookShare to Pinterest
Labels: Conventions, Perspective, Photos, Photoshop, Technique