Human Torch—Don't Try This at Home 
In the summer of 2006 (as if it weren't hot enough) I enlisted the help of a friend of mine from high school whose particular talents used to get him in a lot of trouble. Shane Lacker—we called him "Slacker" for short—eventually found a suitable outlet for his life's passion at Universal Studios. A new park, Islands of Adventure, had just opened up when we graduated in '99 and he landed a job as a grip boy on The Eighth Voyage of Sinbad Stunt Show. He eventually worked his way up to roving pyrotechnician for the entire park. He's now working on their Harry Potter attraction, due to open this summer. 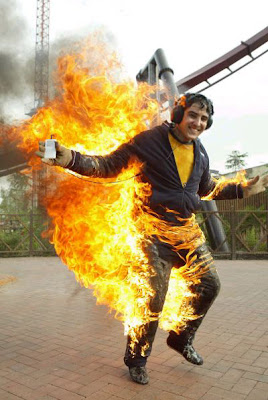 When I was in the midst of painting Mythos: Ghost Rider (and soon to be on Fantastic Four) I was in need of great fire reference. During my trip home to Florida that June, I got the bright idea to ask Shane if I could photograph some of his stunts. With an eagerness that made me think he had always wanted to set me on fire, he suggested that I try it myself. After every assurance was made that it was completely safe, I agreed to this insanity. 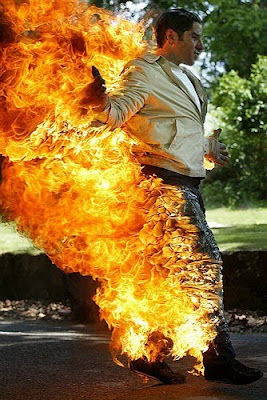 Once I had signed away my life, he took me into the park where his team padded me up and doused me with flammable chemicals, including a gel that completely covered my face and hair. Although I had intended to get particular poses and angles, once I was on fire, those concerns magically faded away. We ended up just doing whatever we thought was funny at the time (and whatever the available props and wardrobe would allow).

While an amazing experience, I have to stress that this was done with a professional stunt team, so please don't try this at home (or anywhere) without the supervision of experienced technicians. 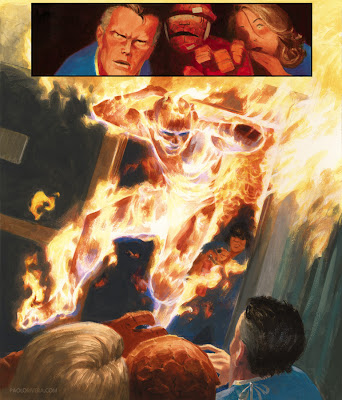