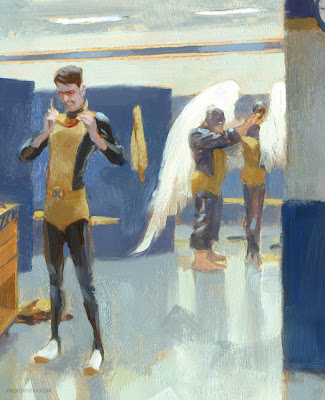 I spent the better part of last week in Providence, lecturing at New Urban Arts and RISD, both of which were great experiences. The students and teachers were more than accommodating, and I will be sure to visit again in the future. As usual, it was also a trip down memory lane, giving me the chance to catch up with friends and explore some old haunts. One completely unexpected highlight was running into Brian Stelfreeze, who was in town doing basically the same thing that I was. While I didn't get to see his lecture, we did get to talk for a bit thanks to Shanth Enjeti and Nick Jainschigg (I took Nick's Sci-Fi/Fantasy Illustration Class when I was just a freshman, setting me on the path that would eventually lead me here).

I also have to say thanks to Ann Smith and Evan Larson, two talented friends from school who were kind enough to give me shelter, not to mention cart me around.

Today's detail from Mythos: X-Men features a peak into the locker room as the guys get ready for a Danger Room training session. What I probably should have clarified is that Cyclops' eyelids are glowing as he squeezes them shut to safely switch from glasses to visor. While the typical X-fan could deduce this, I think a close-up was in order. In the background, Beast helps zip up Angel, whose wings are a tad unwieldy. Now that's what I call teamwork.
Posted by Paolo Rivera at 9:00:00 PM
Email ThisBlogThis!Share to TwitterShare to FacebookShare to Pinterest
Labels: Color, Details, Mythos, Painted, Sequential