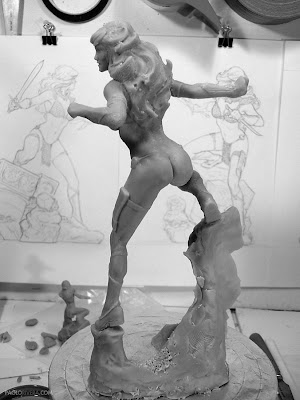 Red Sonja (process photo)
2004
Super Sculpey
10" tall
The following question is from Cathy Stephens, a student who recently asked me for some sculpting tips. The image above is a work-in-progress pic from my 2004 Red Sonja sculpture. I've been gathering all the photos I took during the process, but it will be some time before I post all of them. In the meantime, this will have to do.

Cathy: Thank you very much for giving me the opportunity to ask you some questions about sculpting. I'm sculpting a 10" female figure out of super sculpey, and I just have a couple questions specifically about sculpting the hands and head. When sculpting the hands, do you have wiring going into each finger, or do you use just clay? As for the head, I've seen sculpture artists sculpt the head directly on the
body as well as sculpting it separately and attaching it after. Do you know if one way is easier then the other or is it just purely preference? I would greatly appreciate any other tips you might have for sculpting hands and head as well.

Paolo: 10" is pretty small, which has major consequences for things like hands. I've only sculpted one full figure at that size and I made sure that her hands were clenched into fists. At that scale, fingers are essentially the same diameter of my thinnest armature wire, so there isn't much "sculpting" that could go on around it. There are, of course, tricks to get around this, such as resting the hand on another part of the body — both hands of Michaelanglo's David come to mind. Try and think of the form abstractly, as if you were building an architectural structure. How much risk are willing to take on the most delicate forms? Can they support themselves, let alone an exterior force?

I don't know exactly what you're going for, but I'm imagining the most extreme case: a hand extended away from the body with fingers spread. If you're challenging yourself this much, you obviously like pain, so I would try a study of just the hand. Nothing is keeping you from testing the limits of your abilities (and the forces of nature) on a smaller scale. You might just save yourself time in the long run.

When it comes to the head, I think you'd be better off keeping it attached. Sculpture is hard enough as it is, so complicating the technical process further would only detract from your ability to evaluate gesture and anatomy, which is really about the form as a whole. That approach (I'm guessing here) is most likely taken by professionals in the field who have mastered the fundamentals (hopefully) and must bow to other concerns, such as mold-making, casting, shipping — the multitude of reproduction challenges. Keep your head on!
Posted by Paolo Rivera at 9:32:00 PM
Email ThisBlogThis!Share to TwitterShare to FacebookShare to Pinterest
Labels: FAQ, Sculpture, Technique