Otherwise known as a parallel ruler, this contraption is a quick and accurate way of drafting a series of parallel lines, a very helpful addition to any architectural drawing. I had previously purchased a parallel glider, but found that the accuracy was not sufficient for me, especially over long distances (I actually still use the glider, but only for interpolation between the lines set out by its more accurate counterpart).

When setting up a composition in 2-point perspective, one of the dimensions, most often the vertical, can be represented by a series of parallel lines. I've found that my freehand drawing improves in accuracy when I am drawing over and around a predetermined guide. In other words, I can draw a straight line without a ruler, which is not only faster, but livens up the line without losing too much precision.

In the panel below, you can see where I've indicated verticals across the entire composition (This isn't the best example I have, but it's the only one I'm allowed to show for now). I've gotten in the habit of using an H pencil to rule my guidelines, which is light, but withstands constant erasures. You may also notice small numbers in the margins of the page; these help to organize the converging lines in an otherwise complicated tableau. This topic warrants its own post, but in the meantime, James Gurney tackles it on his blog. 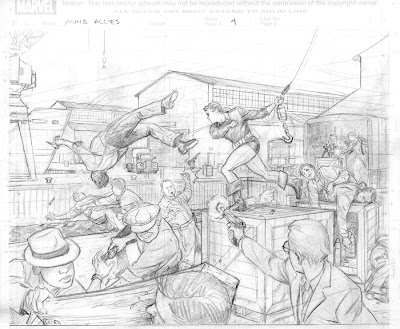