Google Street View (and Me) 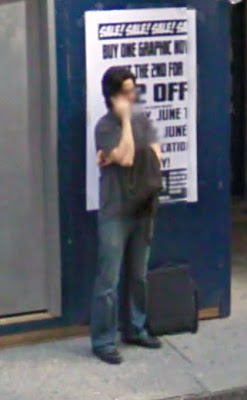 You heard it here first: I'm famous. If you'll indulge me for a moment, you will (hopefully) find that this post is not as off-topic as it first appears.

Several months ago, as I was walking to the venerable Jim Hanley's Universe in Manhattan, I received a call from my Dad. Being the loving son that I am, I took the call and proceeded to carry on a rather long conversation with him. After some time, I saw a van drive by with a pole on the roof, capped by a circular, black gadget. Using Google Street View extensively as a reference tool, I immediately knew what it was and watched it drive past with the hope that someday my image would grace the internet — that day has finally arrived.

The above image is an embedded version of the larger internet application. You can either click and drag to navigate through the space, or press the arrow keys (left and right to pan, up and down to travel).


Aside from the thrill of being an instant internet superstar, I've been wanting to do a post on Street View for some time. It's a fantastic resource that I often use for inspiration and research. For instance, in the Young Allies one-shot I drew earlier this year, I took a virtual spin along the River Seine to get a feel for a Parisian high-speed chase.

Environment and architecture reference are the two most obvious benefits of Street View, but it's also a great source for candid shots of people and vehicles, especially in a traffic-heavy city like New York. As you can probably see, Google makes every effort to blur out faces using an automated program, but there's still enough information there to inspire personal clothing styles and body types.

While the panoramas are fairly up-to-date, I hope that Google will someday archive subsequent "passes" into a searchable database, allowing us to not only explore cities in space, but time as well. I can't wait to look back (wearing shiny spandex, I'm sure) at how silly my clothing choices were in the first decade of the 21st century. I know they've already updated New York at least once because the current crop of photos is at a much higher resolution than the previous (making my job even easier).

What I would like to stress, however, is that I glean visual information from Street View, rather than directly copying it (though I read of at least one project that does just that on Lines and Colors). I am searching for ideas, relationships, and experiences, rather than compositions. Admittedly, that can be a gray area, but that's the general principle I adhere to when finding inspiration on-line, whether through Street View or a general image search.

I hope that was at least slightly informative. Now I look forward to basking in the glow of my newfound celebrity status.
Posted by Paolo Rivera at 9:00:00 PM
Email ThisBlogThis!Share to TwitterShare to FacebookShare to Pinterest
Labels: Appearances, Technique, Tools of the Trade