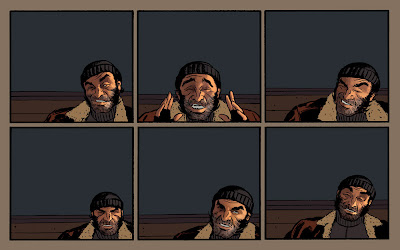 It's bloviatin' time! This is another excerpt from my Brooklyn Public Library Lecture:

While most of us are born with the ability to “read” color, it takes some additional training to be able to “speak” it. For me, the first step was to understand the dimensions of color, of which there are three.

When one speaks of something that’s three-dimensional, they are most likely referring to an object that exists in space — something that has width, length, and depth. I find it difficult, in fact, to even imagine a world with more or less dimensions. Time can be considered a dimension, but it lies on an axis that can only be viewed one point at a time, with no chance for a second glance, at least not directly.

The first and most primal of the color dimensions is that of value. For the artist, this refers specifically to lightness, darkness, and everything in between. The remaining dimensions are closely related and therefore difficult to describe independently. Saturation, for instance, is often described as the intensity of color. Well, what is color? Color, in this case, refers to hue, the last of our three dimensions. It’s also difficult to define. How would you describe red to someone who can’t see?

You can’t (or at least I can't). It’s a psychological experience that doesn’t translate easily. However, those experiences are nevertheless real, and they have physical counterparts that are well understood. Value is, simply, the presence or absence of light energy, hue is the frequency of that light, and saturation is the purity of that frequency. 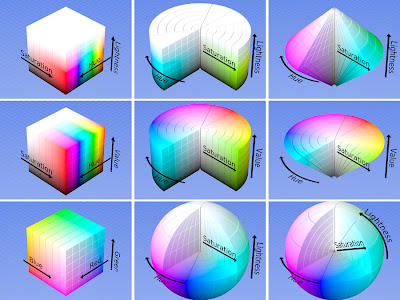 Perhaps it was inevitable that color would be approached using a familiar mental framework, that of space as we have come to know it. When the qualities of our color experience are plucked from the real world and plotted on a graduated, abstract form, certain patterns begin to emerge, allowing us to understand relationships that were previously taken for granted.

By arranging these scales through corresponding colors and their relationships, a three dimensional space begins to emerge. However, the shape is not precisely defined, so there are quite a number of interpretations of the final form. And like any map projection of the globe, there are pros and cons to each model. Sometimes Greenland is deceptively large (not to mention, not green). The point is, it’s not a real space in there — it’s just a model — so things happen inside that don’t match up with normal geometry, as we know it (I'm talking to you, Non-Euclid). But having a sense of the fundamental relationships is what’s important, especially for the artist.

The above image comes from Wikipedia, which has an article devoted to color solids. In the next excerpt, I'll explore the concept of contrast and the crucial role it plays in our perceptions.

Have a great weekend!
Posted by Paolo Rivera at 9:00:00 PM
Email ThisBlogThis!Share to TwitterShare to FacebookShare to Pinterest
Labels: Color, Inked, Theory