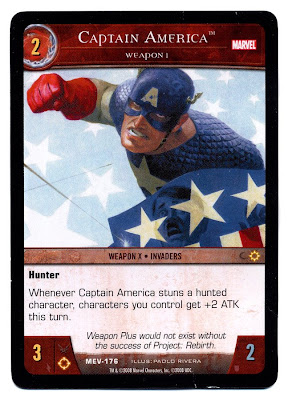 I am sometimes pleasantly surprised to see my artwork used in ways I had not originally imagined. Earlier this year, someone at a convention was kind enough to give me a spare card from his collection. Marvel artists aren't generally notified when their artwork finds a secondary use, but it's nice to see that we still get credit (at least in this case). What I immediately noticed, however, is that they used an earlier version of the Mythos: Captain America Cover, which had Hitler's hair parted the wrong way.
Posted by Paolo Rivera at 9:00:00 PM
Email ThisBlogThis!Share to TwitterShare to FacebookShare to Pinterest
Labels: Covers, Mythos, Painted