The following is an excerpt from my Brooklyn Public Library lecture... although I don't think I actually got to it. I've also added to it since. 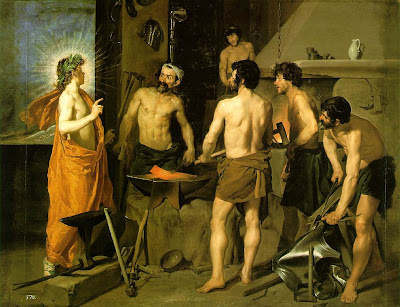 There’s a maxim about lighting and detail that I’ve heard from a number of illustrators, making its source difficult to pin down. It suggests that detail in a painting should be limited to one of two regions: light or dark. Velazquez is the first painter that comes to my mind when I think of this principle. His shadows recede into the background, existing only to give light some competition. Of particular interest in the above painting, The Forge of Vulcan, are the shaded areas on the figures. Where light interacts with the figures, form is illuminated. Where light does not, form (or detail) is lost. 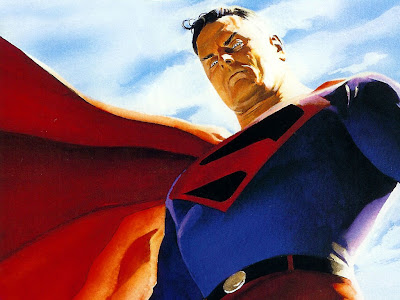 On the other hand, Alex Ross is a great example of a painter who likes to keep us in the dark, so to speak. He often places his figures in blinding light that prevents us from peering into anything but shadow. The effect is dramatic. However, I believe it’s also one of the reasons he’s sometimes criticized for being too photographic. That blown-out effect is a phenomenon that is (I think) subconsciously associated with photography. I’m quite certain that Velazquez never saw anything that looked like an overexposed photo. 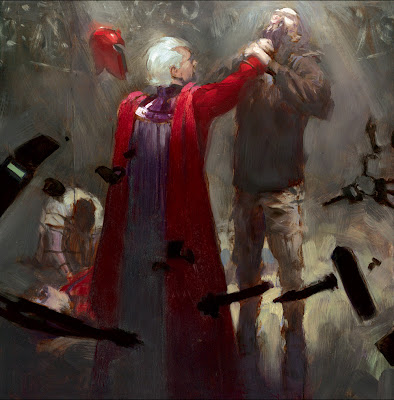 Finally, here is an example of my own work for which this principle applies (Mythos: X-Men page 3, panel 1). The effect is always most pronounced in spotlit situations, such as this. With no incident light to reveal form, objects in shadow are only seen when light from behind traces their silhouette.
Posted by Paolo Rivera at 9:00:00 PM
Email ThisBlogThis!Share to TwitterShare to FacebookShare to Pinterest
Labels: Color, Mythos, Sequential, Technique, Theory