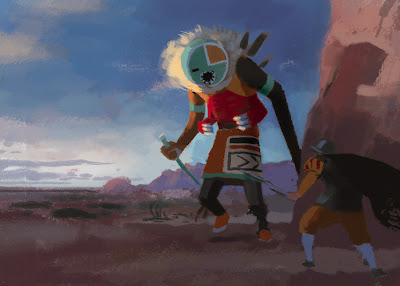 As was mentioned earlier this week at the Art Department, I will be contributing to this year's MicroVisions, an auction that benefits the Society of Illustrators student scholarship fund. I don't often get to do whatever I want, so this was a nice opportunity to explore the recesses of my brain. This is the color study I came up with, the final version of which I should finish next week (it'll only be 5 x 7 inches, hence "Micro"). Possible titles: Hurricane Kachina, The Audacity of Hopi, or (most likely) Welcome to the New World.

I had better finish this next week since I'll be going to Taiwan on the 21st. I can't wait! I get to spend two weeks with the girlfriend that I never see because we're always working so much.

Speaking of which, I'm already a few pages into my current project, Young Allies, part of the Timely 70th Anniversary series. I was going to stick with Spidey for the time being, but I couldn't resist another World War II story. Roger Stern is writing and I'm doing pencils, inks, and colors. Once it gets solicited, I'll show some of the work. It's a great script — probably the most action-packed one I've illustrated.

Have a great weekend!
Posted by Paolo Rivera at 9:01:00 PM
Email ThisBlogThis!Share to TwitterShare to FacebookShare to Pinterest
Labels: Color Studies