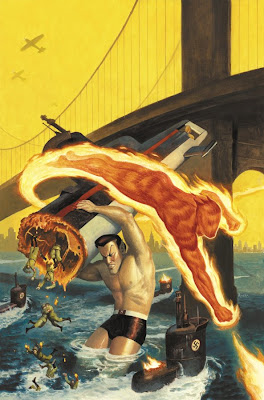 This is one of the covers I've been itching to post for a while. Some of you caught a sneak peak at the New York Comic Con, but here is the official unveiling: Marvel Mystery Comics 70th Anniversary Special #1. It should be hitting shelves May 20th. 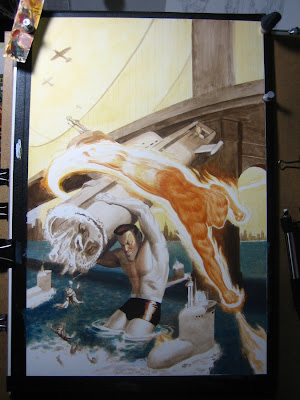 I took some progress pics along the way that I thought I'd share. The paint is applied very thinly, leading many people at the last con to think my originals were just prints. I guess I just like conserving paint — I'm still using most of the small tubes from my first Acryla Gouache purchase back in mid-2006. 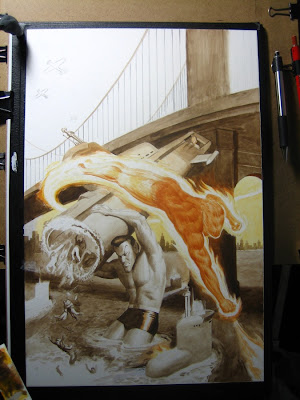 I'm pretty set in my ways by this point: I almost always begin each piece with a sepia gouache under-painting. My only exceptions are for very bright subjects, such as fire, for which I use permanent yellow-orange and touches of burnt sienna. It helps to keep the final piece from getting too muddy, especially with transparent mediums. I remember noticing back in high school that Alex Ross would paint his entire compositions in black, with the exception of red objects,such as the Flash, which were rendered in their final target colors. 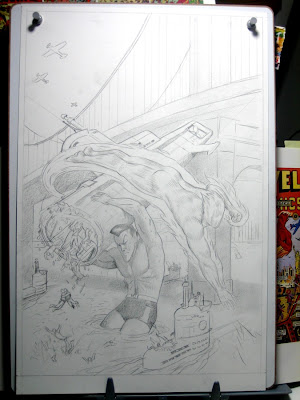 This is the pencil drawing just before I taped it to the dry-erase board. You can see my trusty magnets holding it in place. 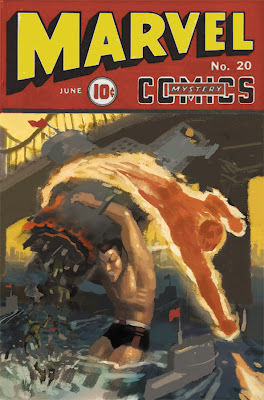 Finally, here is the digital color study that started the whole process. I lobbied heavily for the red band, but they wanted the entire line to have a consistent trade dress. You can see the final product at marvel.com.
Posted by Paolo Rivera at 9:12:00 PM
Email ThisBlogThis!Share to TwitterShare to FacebookShare to Pinterest
Labels: Color, Color Studies, Covers, Digital Color, Technique