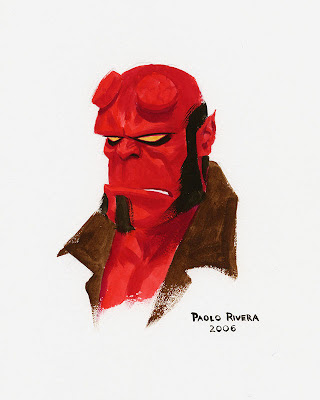 Nothing fancy for this post. Just a Hellboy head sketch I did last year for a friend's daughter. Hope everyone has a scary (but safe) Halloween.
Posted by Paolo Rivera at 6:11:00 PM
Email ThisBlogThis!Share to TwitterShare to FacebookShare to Pinterest
Labels: Pin-Ups
2 comments

Mythos: Fantastic Four comes out next Wednesday (Halloween). You can check out a six-page preview at newsarama.com. 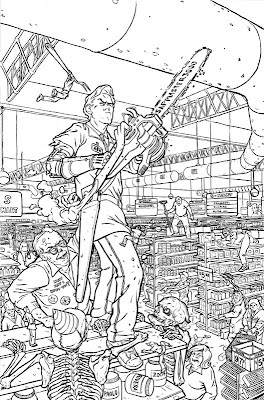 I've got a couple pieces in a show at the MoCCA that opens this Saturday night. 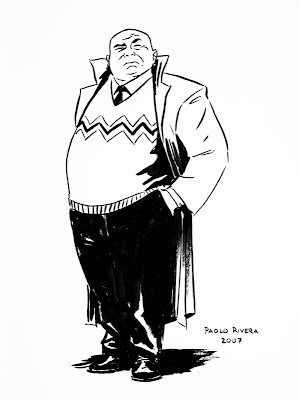 And I'll be signing and sketching at the Big Apple Con next month, November 16-18.
Posted by Paolo Rivera at 10:13:00 PM
Email ThisBlogThis!Share to TwitterShare to FacebookShare to Pinterest
Labels: Covers, Mythos
0 comments 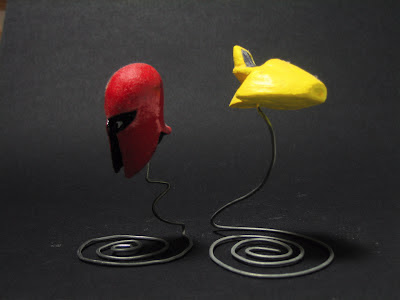 Here are some more of the maquettes that I promised. They help me to think of things in three dimensions and set up lighting situations. Plus, I just like having them sitting around while I work. I think these are the only two I've ever painted — most I just leave bare. Below are some details from Mythos: X-Men, the book for which the maquettes were created. 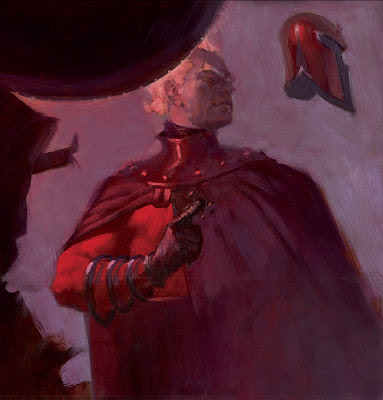 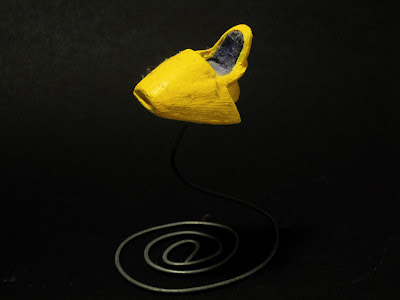 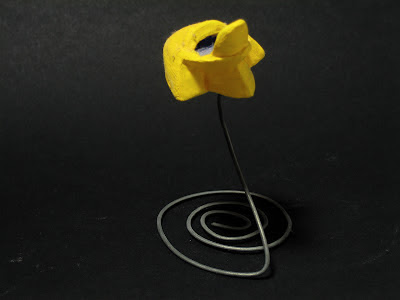 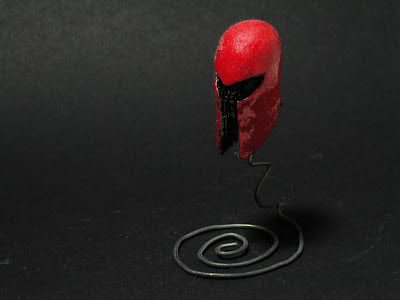 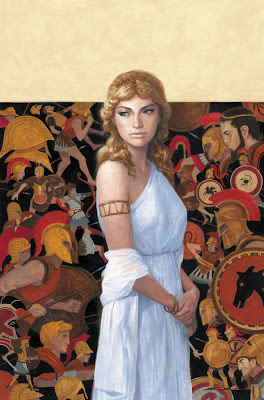 Here's a sneak peek at my latest cover, just finished today. It's for the Iliad #1, part of Marvel's Illustrated Classics line. If all goes as planned, I'll be doing the covers for the entire series, 8 in all. 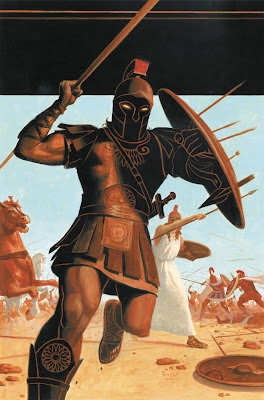 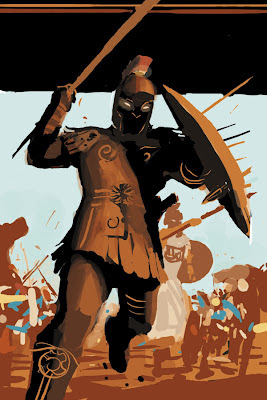 And this is the cover to #2 (along with a prelim sketch in Photoshop).
Posted by Paolo Rivera at 12:23:00 PM
Email ThisBlogThis!Share to TwitterShare to FacebookShare to Pinterest
Labels: Covers, Penciled, Photoshop
2 comments 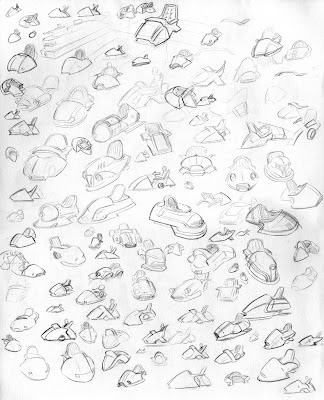 At the beginning of this gargantuan project called Mythos, I got off to a really slow start. This was almost 3 years ago and I'm still not done. Sometimes I think it was worth it. Other times I think I could have "cut corners" without sacrificing the overall quality. Comic book writer Ivan Brandon says that I do just the opposite — that I actually "add corners" during the creative process. I don't dispute that, but I also feel it's a necessary part of the comics I want to make.

Anywho, this is a whole page of design sketches for Professor Xavier's hover-chair in Mythos: X-Men. I often think this is just one more way to procrastinate, especially when I didn't even use my favorite design, but it's also one way to get motivated for a large undertaking. 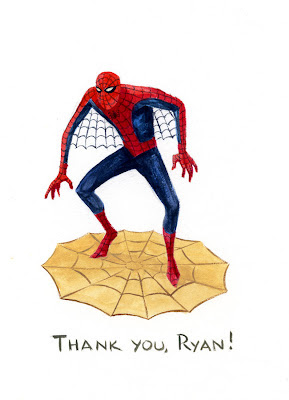 Here's a thank you pin-up for my roommate, Ryan Dunn, who was kind enough to make the Mythos: Spider-Man trailer for me this past summer. It's been several months, but I finally got around to it.

The pose is based off of a tiny Steve Ditko drawing on the first page of Amazing Fantasy #15, Spider-Man's first appearance.
Posted by Paolo Rivera at 9:55:00 AM
Email ThisBlogThis!Share to TwitterShare to FacebookShare to Pinterest
Labels: Pin-Ups, Spider-Man
0 comments 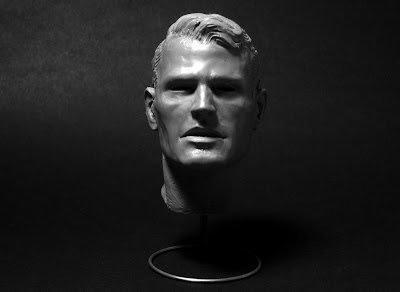 Before I begin a new Mythos book, I usually sculpt small maquettes of the main characters— in this case, Captain America's alter ego, Steve Rogers. I use Super Sculpey Firm, a modeling compound that you can bake in your home oven, or with a heat gun. There is a small armature made of galvanized steel wire that's looped around inside the head for dimensional stability. I will often bake in two stages, one to create a firm grip on the wire, and the second for the real sculpting. 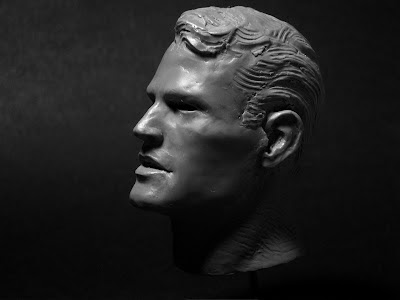 Lately, I've been lightly oiling the baked maquettes so that they reflect light in the same manner as skin. This is especially important for achieving naturalistic highlights. 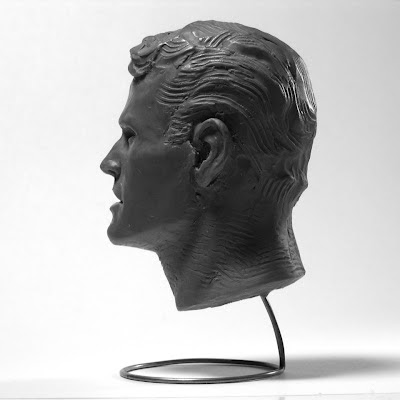 I sculpt the hair in a style similar to the way that I paint, using broad strokes. I use a rake, which produces many of the same results as a brush, only in three dimensions. I try to think of the hair as a mass with direction and edges, rather than as individual hairs. 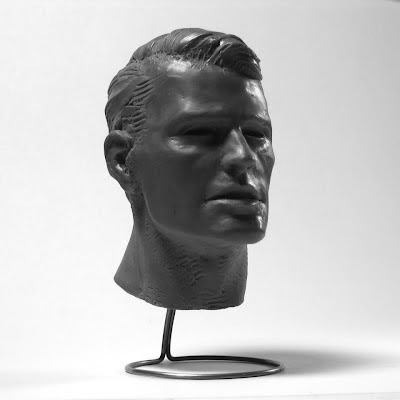 Sculpture has become an invaluable part of my painting process. The proportions and angles of an individual face are much easier to keep consistent when painting from a 3D model. Beyond that, complex lighting effects are much easier to produce. Also, by sculpting the character, I get a better sense of their features, allowing me to maintain the same likeness throughout the book, not to mention that I can "cast" the perfect face for the role. 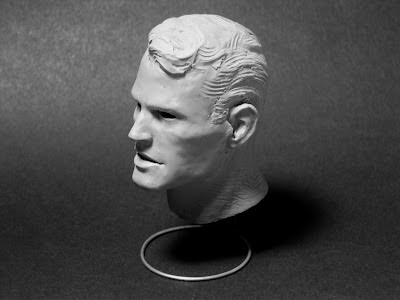 Once I've made the maquette, it sits at my desk, always ready to "pose" for me. My friends probably got tired of me asking them after several years of modeling. 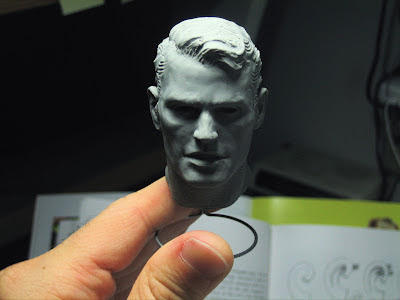 And finally, here is a picture to give a sense of scale. This is actually one of the larger heads, the others being around an inch tall. As I get them all photographed, I'll post my other maquettes, which range from a Ghost Rider skull with moveable jaw to Professor Xavier's hover-chair from X-Men.
Posted by Paolo Rivera at 9:23:00 AM
Email ThisBlogThis!Share to TwitterShare to FacebookShare to Pinterest
Labels: Mythos, Sculpture, Technique
9 comments