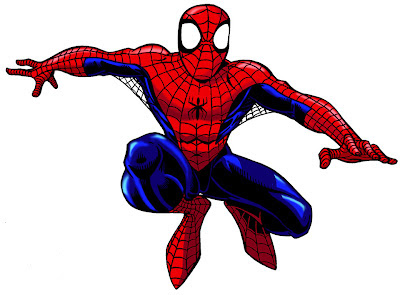 If you've read comics in the past decade, then you've probably heard of Mike Wieringo. I never met him, but I would've liked to, and I had no reason to believe that I wouldn't, since this industry has been very kind to me from the beginning, allowing me to meet most of the heroes of my youth at conventions and social events.

If you've kept up with comics news since August, you've probably heard that he has since passed away due to a heart attack no one would've ever predicted. From everything I've heard about him, he wasn't just a great artist, he was one of the nicest guys in the industry.

I don't have much to add that hasn't been said already, but I thought I'd share a copy of his Spider-Man that I did my junior year of high school . I copied it from an issue of Wizard Magazine while sitting on the bench of my high school soccer team — I literally played 4 minutes all season — dreaming of one day becoming a comic book artist.

Apparently, dreams do occassionally come true. I'd like to thank 'Ringo for being one of the most positive influences on the comic industry, community, and artistic hopefuls.
Posted by Paolo Rivera at 2:27:00 PM
Email ThisBlogThis!Share to TwitterShare to FacebookShare to Pinterest
Labels: Pin-Ups, Spider-Man