I'll be part of Comic Art Live this weekend (November 12-13), a virtual convention experience hosted by ComicArtFans.com. My panel will be on Sunday from 10-11 a.m PST with my long-time rep, Mark Hay of Splash Page Comic Art.

We'll have 5 new 4x6" head shots to sell, and I'll be answering questions while painting an 11x14" Thanos piece inked by my dad, Joe Rivera. The artwork will be auctioned off during the panel (and starting early this time around), so be sure to tune in if you're interested in purchasing some original art.

The event is free to attend with multiple ways to join in. You can find all the details here. Hope to see you there!

Here's some behind-the-scenes reference for The Walking Dead #47. I'll often take reference from 2 different faces (or more) in order to get something unique. But every once in a while, I'll get just the right look from a single model.
This issue is already in stores, full details here. I'll also have some signed copies of the series in my shop soon... just need to get my act together!
Posted by Paolo Rivera at 7:00:00 AM
Email ThisBlogThis!Share to TwitterShare to FacebookShare to Pinterest
Labels: Covers, Painted, Wacky Reference Wednesdays
0 comments

This cover was tough for a couple reasons. By this point in the series, I had already established the main visual theme, that of pure white as a representation of something lost. Sometimes that was teeth, other times, bullets. (For those of you who are behind, spoilers below...) 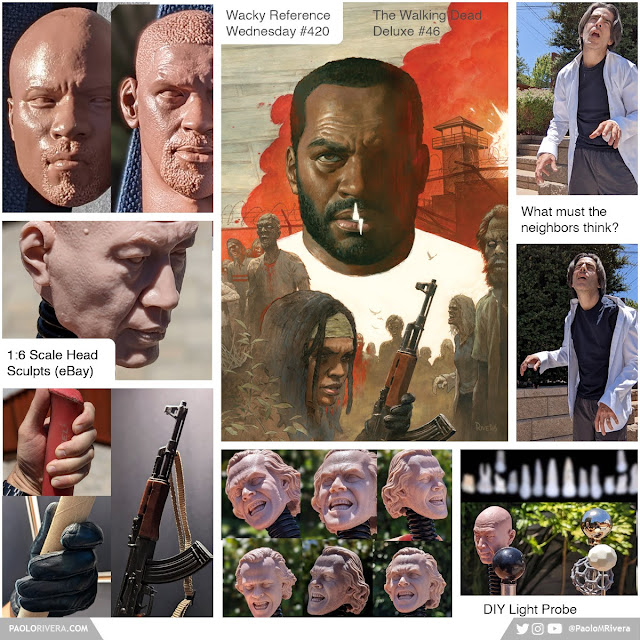 All my initial sketches involved a missing head, but I wanted to give Tyreese something with a bit more dignity. Late one night, it occurred to me that I could just flip it — I could paint a nice, stately portrait of him, but make it look like he was just wearing a white t-shirt. And after re-reading the issue, I thought the teeth would be a disturbing addition that would serve as a call-back to the first cover, as well as create a bit of mystery for those unfamiliar with the events.

Now for the rookie mistake. This was the 4th of 6 connecting covers and by this time I had an enormous Photoshop file where I could pencil new covers perfectly aligned with the finished ones. The only problem was that I hadn't been accounting for the overlap necessary for artwork that's trimmed on both sides.

The production team had been making up for that mistake by overlapping them for me (with a bit of Photoshop massaging). But by the time we got to this issue, the gap was getting too big. My normally patient editor emailed asking for some truly last-minute edits. I ended up having to slash a zombie to shift the artwork, but it wasn't a big loss. That kind of surgery would've been much more difficult on the following cover, filled with main characters... and more floating heads.

My last connecting cover for The Walking Dead Deluxe is out today, but here's a look at the process behind #45. I use a desktop cardboard background to stage my props, lit with a Lume Cube Panel Mini. I've also been trying to learn Blender for simple lighting setups (and to take advantage of my many models from 3D Scan Store. 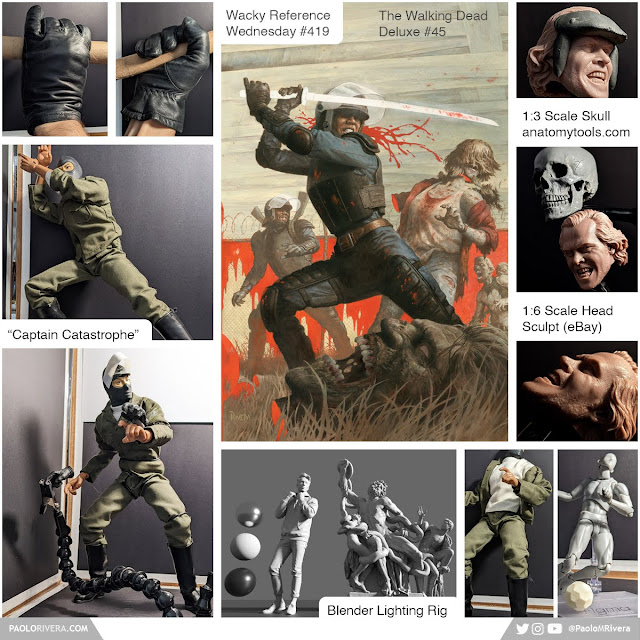